Time to Come Home: Pigs, Stones and the Blues 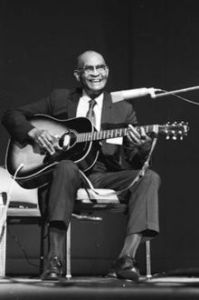 In September 1929 in the Peabody Hotel in Memphis, a young blues singer called Robert Wilkins recorded a song entitled “That’s No Way to Get Along.” It was a song about no-good, cheatin’ women, as were so many of the blues songs of the time.

About six years later, Robert’s wife became very ill, and, given the lack of access to medical care that was common in black communities in the Deep South, Robert was at his wits’ end. In his desperation he cried out to God and promised that if God would spare his wife, he would turn his life around and serve the Lord.

Remarkably, Robert’s wife did indeed survive, and true to his word, Robert turned his life over to God and in due course was ordained a minister in the Church of God in Christ. He turned his back on the blues, but continued to play his guitar and sing. He changed the lyrics of some of his old blues songs, including “That’s No Way to Get Along,” which became a compelling re-telling of Jesus’s parable of the prodigal son from Luke 15.

Rev. Robert Wilkins was “rediscovered” in the early 1960s and performed a version of “Prodigal Son” at the Newport Folk Festival in 1964, clocking in at some 9 minutes long. The song was subsequently taken by the Rolling Stones and performed by Mick Jagger and Keith Richards on their 1968 album, Beggars’ Banquet, providing Wilkins with some welcome income in his old age. 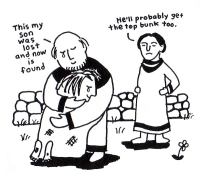 The story of the prodigal son is one that is very familiar to most people. The idea of “the prodigal returning” is deeply embedded into our culture to people of faith or no faith. Although told in the context of a rural Palestinian setting of 2,000 years ago, the story still resonates today across cultures. We miss some of the nuances, of course – the idea of a son asking his father, in this social context, for his inheritance, is tantamount to telling his father “I wish you were dead,” which Jesus’s hearers would have found utterly shocking and would have served to highlight even further the father’s willingness to welcome his wayward son back. The idea of a respected, village chief watching for his son and then pulling up his robes to run to greet him – an elder like this would never have been seen running – again would have amazed Jesus’s audience.

And also, the story was likely told by Jesus as a parable of what was happening to his people, Israel, as a result of his own coming. For Jesus, the long hoped for day of restoration and the arrival of God’s reign, was beginning through his own life. So the story tells Israel’s story of going away from God to live in a land of pagans (note the element of the son working with pigs in a strange land), but then coming back and being welcomed by God – with the disapproval of the elder son, clearly representing those Jewish leaders who opposed Jesus and rejected his ideas about the arrival of God’s kingdom. Israel had, of course experienced life amongst pagans, when in exile, and then again whilst in their own land under a succession of invaders including the current lot, the Romans. Jesus message is clear – that God is now welcoming all those who will return to God, including the “tax collectors and sinners” who were despised by Israel’s leaders.

But beyond the quite clear application to Jesus’s own historical situation, the story is a powerful one which appeals to most of us – someone who gets themselves into a bad situation; who makes some attempt at making a change, but with low expectations of the result (“I don’t deserve to be called a son; just treat me like a hired hand”); undeserved, but lavish parental love; jealously from those who feel offended that their loyalty has been taken for granted. We can all relate to it.

But the unselfconscious, exuberant love of the father, which refuses to stand on ceremony, and is prepared to be utterly undignified, stands out of course. And reminds us that, no matter how low we go, how far gone are things, there is always the chance of forgiveness, of love, of a clean sheet. Like the prodigal, we just need to come home.