Buddy Guy: We gotta be careful how we treat each another.

A few night ago I went to see Buddy Guy play the Apollo Theatre in Hammersmith in London. This is a lovely old theatre dating from the 1930’s with a fan shaped auditorium; it’s comfortable, has good acoustics and it was a fine setting for the blues master, himself born in the 1930s. At nearly 80, Buddy Guy is in remarkably fine fettle, his voice strong, and still able to give full expression to that sweet falsetto. And his guitar playing is undiminished as well, the licks and tricks as nifty as ever. He gave us an hour and a half’s top notch entertainment – not bad for a guy his age – was constantly joking around, engaging with the audience, and at one point, came right off the stage and wandered up and down the aisles of the theatre singing and playing, constantly mobbed by fans taking photographs and selfies with him. Quite a show.

Before Buddy appeared we had a supporting set from a young guy whose performance had us all enthralled. Nobody around me knew who he was, but his guitar playing was stunning – not just in terms of technique, but also in terms of its musicality – and his singing and stage presence were impressive. Turned out this was one Quinn Sullivan, a protégé of Buddy’s and…he’s seventeen years old! This young guy is the business, and surely has a great future. He came back later to play with Buddy and we enjoyed the two of them mimicking  a number of guitar greats, including Guitar Slim, B. B. King and Jimi Hendrix.

Buddy Guy played a selection of blues standards and songs off his latest album, Born to Play Guitar, backed by a superb band. One song off the album he didn’t play, particularly appropriate at the end of this particular week of violence in the United States, is Crazy World: “It’s a crazy world, the hole we’re digging, getting deeper every day…”

So it seems – police violence against the black community seems unremitting and on top of that we had the senseless killing of police officers in Dallas. The Atlantic summarized the week: 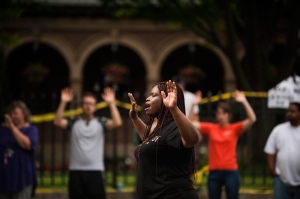 “Alton Sterling, 37, was shot and killed by police officers on Tuesday, July 5, while he was selling CDs outside of a convenience store. The following day, Philando Castile, 32, was shot and killed by a police officer after he was stopped for a broken tail light. Videos of both killings were widely shared on social media, causing hundreds to take to the streets in protest of police actions, as well as memory of the two men killed. Thursday night, snipers shot and killed five officers at such a protest in Dallas, Texas. Questions of police brutality, America’s historic racism, the Black Lives Matter movement, and second amendment rights have been pushed to the forefront of the nation’s consciousness.”

“We all gotta be careful, Buddy sings, “How we treat one another.” Because,

“Skin Deep, Skin Deep
Underneath we’re all the same.”

In the song Buddy mentions:

He prefaced his performance of the song by recalling for us that, as a boy, he remembers his mother using a broken piece of glass as a mirror, and that he was 17 before he saw running water from a tap. His words and the song were a stark reminder of the recent history of black experience in America. The legacy of all of this cannot be easily erased and the current experience of African Americans, not least in their encounters with law enforcement, gives rise to a huge amount of fear, resentment and anger.

Michael Eric Dyson wrote a telling piece in the New York Times this week, expressing his sense of the way white people perceive blacks. He talks about the “binoculars” used by whites when looking at blacks:

“Those binoculars are also stories, bad stories, biased stories, harmful stories, about how black people are lazy, or dumb, or slick, or immoral, people who can’t be helped by the best schools or even God himself. These beliefs don’t make it into contemporary books, or into most classrooms. But they are passed down, informally, from one white mind to the next.”

We need to be increasingly aware of the in-built, enculturated biases that we can be prone to and learn to resist. Whites need to seek to learn – insomuch as they can – what it is to stand in a black person’s shoes.

Check out this telling question asked of white people in a recent public meeting.

For Buddy Guy, it comes down to this:

“It all comes down to just one simple rule
That you treat everybody just the way
You want them to treat you.”

That’s not original, or course – “Do to others whatever you would have them do to you,” says Jesus in Matthew 7:12. That’s the fulfillment of the whole of God’s law. It’s a crazy world. But we can all do our bit to make it a little less crazy. “We gotta be careful, how we treat one another.”