Last month I fulfilled a long-time ambition and got to see Keb’ Mo’ in concert. He played Union Chapel in London. This is a very interesting location for a gig. It’s a quite lovely church building, with the pews set in semi-circular arrangement, a balcony and a high wooden ceiling. The acoustics are wonderful and wherever you’re seated you have a great view of the stage and are quite close to the artists.

It’s also a working church – it bills itself as “liberal, inclusive, non-hierarchical, and non-conformist.” The principle of its founders was to make Union Chapel a “Friend for All” – enshrined in the Chapel’s deeds and continuing at the heart of Union Chapel Church to this day. It has a thriving service to people who face issues of homelessness, mental health, isolation and crisis, which aims to help people with their long-term recovery.

If you come to a gig at Union Chapel, you can sign up for a meal beforehand at the Café attached to the church, which is run by the homeless project. This gets you a fine meal, allows you to contribute to the worthwhile work, and gives you the benefit of bagging your seat in the venue before the rest of the crowd is allowed in! 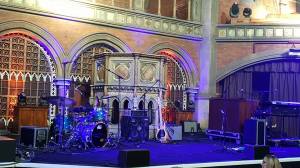 So, all in all, Union Chapel is a great venue, and a packed audience welcomed Keb’ Mo’ and his band on their Hot Pink Blues tour enthusiastically. “I prayed before I came on stage,” joked Mo’ as he launched into Keep It Simple and then got the audience rocking with Am I Wrong. This small group of top-notch musicians comprising Casey Wasner on drums, Stan Sergeant on bass and Michael B. Hicks on keyboards, and of course Keb’ Mo’ who is a fine 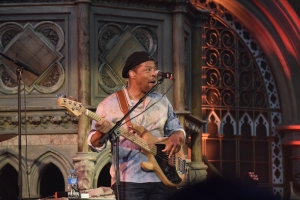 guitarist, were tightly knit throughout and rocked us soulfully through the eighteen songs of the set. The band supported Mo’s singing and guitar playing beautifully throughout, but now and then were able to give full rein to their individual talents – we got a fantastic bass solo from Sergeant on More Than One Way Home, for example, and then each member of the band sang a chorus of The Door, talented soulful singers, every one of them. The whole band seemed to really enjoy playing together and their enthusiasm was quite infectious, with the audience growing more and more appreciative as the evening wore on. By the end the whole crowd was on its feet baying for more.

Keb’ Mo’ played a variety of guitars throughout the evening, including a steel resonator and a very cool looking green Gretsch. He’s a fine guitarist and we got plenty of opportunity to savour this during the evening. He’s also a great singer and song-writer and, in a kind of understated way, commands the attention of his audience. But this is largely because of the high standard of the musicianship, rather than anything else. Keb’ Mo’s is honest music, as the blues tend to be, dealing with life and love, unpretentious, but aspiring to high standards of musicianship. It’s music that draws you in, warms your heart and sends you away with a broad smile on your face.

This is a great song in a genre of music that has plenty of sexist lyrics, where we find women blamed for the misfortunes of men, objectified or the subject of physical abuse. Remember Robert Johnson’s Me and the Devil Blues, where Johnson is “goin’ to beat my woman until I get satisfied?” Or Big Bill Broonzy’s When I Been Drinkin’, with “I’m lookin’ for a woman that ain’t never been kissed, Maybe we can get along and I won’t have to use my fist”.

Leaving aside the violence and discrimination that women throughout the world face, Mo’s song addresses the pressure that our society puts on women to conform to certain stereotypes of looks, dress and body-shape. In a fun song, he coaxes men to give up any outdated expectations they may have that the women in their lives should have to look after their homes or try and emulate the unrealistic images of women on the billboard ads. Good for you, Keb’.

One last thing – Mo’ is now 64. What? He looks an athletic 40 year old. And he seems to live in the music and to enjoy every second of his performance. I’m hoping it’ll not be long before he’s back on this side of the Atlantic.