David “Honeyboy” Edwards was born in Mississippi in 1915 and lived a long life in the blues, which he called “a leading thing.” Son of a share cropper (“Papa didn’t make no money,” he says in his 1997 autobiography), and working in the fields from he was nine years old, Edwards became an itinerant bluesman, playing all over the Delta in juke joints, river boats and good-time houses, first recording in 1942, and eventually settling in Chicago as the blues went electric.

His friend and acquaintances in those early days read like a who’s who of the blues – Charlie Patton, Tommy Johnson, Big Joe Williams, Sonny Boy Williamson, Son House, Memphis Minnie and Robert Johnson. He experienced first hand the 1927 Mississippi River Flood, the Depression, Southern vagrancy laws (Honeyboy was imprisoned for a time working on a cotton farm for hitching a ride on a freight train), and the racial and economic problems of the Black community due to Jim Crow. Honeyboy Edwards really was the last living link to the early blues.

He recorded extensively, was inducted into the Blues Hall of Fame in 1996, and won a Grammy in 2007 for Best Traditional Blues Album. This CD and DVD set, entitled I’m Gonna Tell You Somethin’ That I Know, was recorded in September 2010, just eleven months before Edwards passed away. It’s a remarkable piece of blues history. 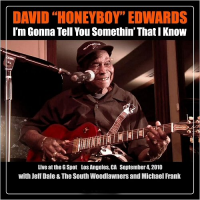 The disks capture around an hour of a performance by the bluesman, accompanied by Jeff Dale and the South Woodlawners, and Michael Frank in the G Spot in Los Angeles. The CD has 9 songs, the DVD 10, plus about 20 minutes of Edwards reminiscing about his early experience of the blues in the Mississippi Delta. This is priceless. He talks about playing with Robert Johnson when he was 21 and goes into Robert’s life and death in some detail. Johnson “was crazy ‘bout two things,” says Honeyboy, “women and whiskey.” His narrative about Johnson’s sad death speaks volumes about the situation of African Americans in the deep South at that time. “Same doctor that would come to a mule would come to you then.” Anyone who got seriously ill would likely die, for want of decent healthcare. Honeyboy’s own mother died at 32 of “dropsy” – or edema, often associated with malnutrition, and both preventable and curable.

We get details, too, about Charlie Patton (“a hell raiser”) and about Honeyboy’s own career –  “been all over the world, Japan, Paris France…Turkey…can’t recall all the places I’ve been.” At 95 Edwards was both lucid and showed a remarkable memory for people, places and incidents long past.

His performance in the gig is quite something as well. He launches into each song with a guitar introduction, whereupon the band joins in, sings with feeling and gives a short guitar solo on his Gibson Les Paul each time. Quite something for a nonagenarian. The DVD is nicely shot, with a kind of sepia tinge and the sound quality good. There are songs by Robert Lockwood Jr., Robert Johnson, Howlin’ Wolf, Muddy Waters and St. Louis Jimmy – a fine collection of classic blues. Sweet Home Chicago is part of the mix, usually attributed to Robert Johnson, but claimed by Honeyboy himself.

“The guitar kept me rolling a whole lot,” says Honeyboy. And it kept him rolling for over nine decades. “God learned me music. He gave me that gift…There ain’t no harm in playing blues, that’s a gift God gave me.” If you’re a blues fan, you don’t want to miss this performance of Honey Boy Edwards’ gift right at the end of his life.