The “most transcendent piece in all American music” – Dark Was the Night, Cold Was the Ground

Blind Willie Johnson’s most famous song is, perhaps, Dark Was the Night, Cold Was the Ground. Of his 29 recorded songs, it’s the one that made it into the illustrious company of Beethoven, Bach, Mozart and Stravinsky on the “Golden Record” on board the 1997 unmanned Voyager space probe, intended for the ears of any intelligent extraterrestrial life form who might come upon it. The astronomer Timothy Ferris, who worked with Carl Sagan in selecting the tracks, said, “Johnson’s song concerns a situation he faced many times, nightfall with no place to sleep. Since humans appeared on Earth, the shroud of night has yet to fall without touching a man or woman in the same plight.”

That’s a nice sentiment by Ferris, but it isn’t really what the song is about. In Johnson’s hands, the song, an old sacred hymn, becomes an evocation of Christ’s solitary experience in the Garden of Gethsemane, and, despite the fact that you really can’t hear the words, it is quite graphic. Johnson, more so than on other songs, moans and groans his way through the song as he plays his eerie slide guitar. A contemporary reviewer enthused about the song, referring to “Blind Willie Johnson’s violent, tortured and abysmal shouts and groans, and his inspired guitar in a primitive and frightening Negro religious song.” 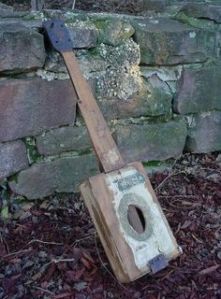 Johnson’s guitar playing is generally pretty nifty, and his slide guitar, where he was able to get great tone out of simply using a pocketknife as his slide, is all the more remarkable, given that up to this point there was no slide tradition in Texas where he hailed from, so he must have taught himself – quite remarkable, given his disability. Eric Clapton called his slide work on It’s Nobody’s Fault But Mine “probably the finest slide guitar playing you’ll ever hear.” On Dark Was the Night, Cold Was the Ground, Johnson’s slide is no less assured.Singer-guitarist Jack White of The White Stripes thinks this song is “the greatest example of slide guitar ever recorded.”

Blues historian Steve Calt said of Johnson’s slide guitar: “His tonal control and sense of timing are incomparable: as opposed to other bottleneck artists he varies the speed of his vibrato drastically, often speeding up as he slides into a note. He is also one of the few bottleneck artists with the ability to consistently sound 3 or 4 discreet melody notes upon striking a string once, a skill that … reflects uncanny left-handed strength, accuracy and agility.”

Ry Cooder was impressed with Johnson’s guitar playing generally, “Blind Willie Johnson had great dexterity, because he could play all of these sparking little melody lines. He had fabulous syncopation; he could keep his thumb going really strong. He’s so good – I mean, he’s just so good!”

He went on to say, “Beyond being a guitar player, I think the guy is one of these interplanetary world musicians, the kind of person they talk about in that Nada Brahma book, where the world is sound and everything is resonating. He’s one of those guys. There’s only a few. Blind Willie Johnson is in the ether somewhere. He’s up there in the zone.”

For Cooder Willie Johnson’s Dark Was the Night – Cold Was the Ground is the “most transcendent piece in all American music.” Even without lyrics, the music and Johnson’s moaning are enough to take us right into the Garden on the edge of Calvary with Jesus.

Dark was the night, and cold the ground
on which the Lord was laid;
his sweat like drops of blood ran down;
in agony he prayed.

Father, remove this bitter cup,
if such thy sacred will;
if not, content to drink it up
thy pleasure I fulfil.”

Go to the garden, sinner, see
those precious drops that flow;
the heavy load he bore for thee;
for thee he lies so low.

Then learn of him the cross to bear;
thy Father’s will obey;
and when temptations press thee near,
awake to watch and pray.

The lyrics, as you can see, are sombre and challenging, but Johnson clearly felt that the music and his mournful moaning were enough to take us into that moment of anguish with Christ in the Garden, prior to his impending execution. As in I Know His Blood Can Make Me Whole, Johnson does not shy away from presenting the challenge of what he felt was the central element of his faith.