Jackson Browne played five sold-out nights at Vicar Street in Dublin. There’s a lovely, intimate feel to this venue, although it does hold about 1,000 people. Down at the Crossroads went on night 2 and here’s what we learned: 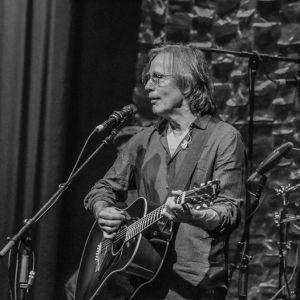 1. Jackson Browne, though pushing 70, still puts on an outstanding show, bantering with the audience, utterly at ease with his band and his extensive back catalogue of songs, and able to hold his audience utterly captivated for over two hours. He’s a great musician as well as a great songwriter, showing off considerable piano and guitar chops along the way.

2. Jackson Browne’s catalogue of songs, going back over forty years, is as good as you’ll hear from any other artist. He played songs from every era of his career, many in response to requests from the audience. He basically abandoned his set list after a couple of songs and performed whatever he could hear shouted out to him (or understand, given the broad Dublin accents of some). Most of these songs have a timeless, enduring quality to the music and an on-going relevance in the lyrics. I’ve lived with some of them for most of these past forty years – they are like old, favourite shirts that you just love to pull on. They’re comfortable, they fit you, they’re just part of you. That said, they’re not dad-rock. A young friend of mine who was unfamiliar with Jackson Browne, told me this week he had checked out his early albums after my enthusiastic Facebook posts about the concert. His comment – simply, “wow.”

3. The band Jackson Browne has assembled for this tour is top notch. Of particular note are Val Callum, who’s played guitar with Jackson for some time, and Greg Leisz, lap steel, pedal steel and all round guitar genius who has joined the band for this tour. Grammy award winner Leisz has played with a who’s who of rock, country and Americana artists and is a jaw-droppingly good musician. His slide guitar and pedal steel work throughout the evening was nothing short of sensational. Val Callum is the sort of guitarist who plays wonderfully and tastefully, maybe unnoticed unless you’re a guitarist and realize just how good the understated stuff is, and then who suddenly, when he gets the nod from Jackson, will dazzle with fast, syncopated runs up and down the fretboard. And spare a thought for Bob Glaub, the bass player – another top class musician – who played bass on the song “The Pretender,” back in 1976, but who was never credited. Browne made that right just before the band launched into the song, to the delight of the crowd.

4. He didn’t play “The Rebel Jesus,” despite repeated calls for it from one member of the audience. Couldn’t remember it, he said. Fair enough, it’s a cover of a Chieftains song (which appears on The Next Voice You Hear). But I’d love to have heard it. The song gets to important matters about the person and mission of Jesus:

“Well we guard our world with locks and guns
And we guard our fine possessions
And once a year when Christmas comes
We give to our relations
And perhaps we give a little to the poor
If the generosity should seize us
But if any one of us should interfere
In the business of why there are poor
They get the same as the rebel Jesus.”

5. And finally – Dublin is a remarkably welcoming city. I managed to get myself hopelessly lost driving to Dublin and was starting to worry about getting to Vicar Street in time for the concert. At a set of traffic lights I rolled down the window and asked directions from a taxi driver in the next lane. “Follow me,” he said and led me all the way to my destination. I tried to pay him but he resolutely refused. Then, after the gig I was sitting in my car desperately fiddling with Google to try and find my way out of the city. Then came a knock on the window and a guy said, “Do you know where you’re going?” He then said, “Follow me.” He jumped into his car and I followed him through Dublin until he got me on the main road to Belfast. The kindness of strangers.