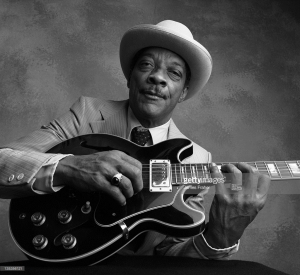 Sidemen, narrated by Marc Maron, is a splendid tribute to three legendary bluesmen – pianist Pinetop Perkins, drummer Willie “Big Eyes” Smith and guitarist Hubert Sumlin. Over an hour and twenty minutes we get brief life histories of the three men, interviews and live performances by them, and tributes from a who’s who of the blues world, including Bonnie Raitt, Greg Allman, Joe Bonamassa, Kenny Wayne Shepherd, Derek Trucks and Susan Tedeschi, to name but a few. It’s a beautifully crafted film, utterly engaging and an overdue appreciation of three musicians who left an indelible mark not only on the blues, but on rock’n roll. Their role was to support, and yet their contribution was foundational for both Muddy Waters’ and Howlin’ Wolf’s bands. Today’s musicians interviewed in the film leave us in no doubt that these three helped redefine modern music as we know it. 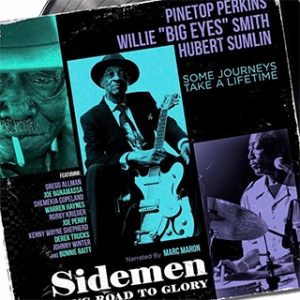 The beauty of the film is in the intimate interviews and live performances shot shortly before Perkins, Smith and Sumlin passed away in 2011, though there is a wealth of concert footage of Waters, Wolf, Hendrix and the Rolling Stones over the years too. Both Perkins and Smith died a few months after their Grammy success for the “Joined at the Hip,” album. Perkins was 97, the oldest Grammy winner, and Smith 75. It was indeed a long road to glory.

The film strongly makes the case for Hubert Sumlin’s induction into the Rock’n Roll Hall of Fame. Not only was he an outstanding guitarist – number 43 in Rolling Stone’s Top 100 Guitarist list, but rated by Derek Trucks as much, much better than that – but he was, according to Kenny Wayne Shepherd, “an extraordinary example of a human being.”

Sidemen is an affectionate, but never sentimental, tribute to three top class musicians who were overshadowed by two titans of blues history, Muddy Waters and Howlin’ Wolf. Any music fan ought to enjoy this film; any blues fan will be delighted – indeed for them it is required viewing.

Racism is evil. That’s always been our stance at Down at the Crossroads. Anyone who knows anything about the blues knows that the blues grew up in the iniquity of the Jim Crow era in the United States and were a visceral response to the suffering and afflictions of the black community. Skip James’s Hard Time Killin’ Floor Blues captures the grim reality of the time for his community:

“Hard times is here
An’ everywhere you go,
Times are harder than ever been before.”

Leadbelly’s 1930 Jim Crow bemoaned the social situation he was in and pleaded, “Please get together, break up this old Jim Crow.” In Bourgeois Blues, he takes issue with the idea of America being the “land of the free” and “home of the brave” – for Leadbelly, it was somewhere he was “mistreated” by the “bourgeoisie.”

And Josh White’s Trouble in 1940 says bluntly, “Well, I always been in trouble, ‘cause I’m a black-skinned man.” All he could expect from life was “Trouble, trouble, ever since I was born.”

Despite the gains made since those days, racism has patently not gone away, and it’s been heartening to hear some of today’s artists putting it firmly in their sights. Luther Dickinson of the North Mississippi Allstars takes a look at the current state of race in his country in Pray for Peace, and wonders just what is going on:

“I think our grandmothers would be broken hearted
To see their children’s children right back where we started…
Makes me want to holler, makes me want to moan.”

Other artists have recently echoed this theme: Jason Isbell in White Man’s World confronts the privileges and disadvantages inherent in American society because of race, and his own complicity in it:

“I’m a white man looking in a black man’s eyes
Wishing I’d never been one of the guys
Who pretended not to hear another white man’s joke.”

For a good summary of the problems of race in the US, check out Nicholas Kristof’s series of articles in the New York Times, entitled “When Whites Just Don’t Get It.” Outside of the evident problem of the shootings of unarmed blacks by law enforcement and the problems in the criminal justice system (just read Bryan Stevenson’s Just Mercy to understand more about this), Kristof points out that “overwhelming research show[s] that blacks are more likely to be suspended from preschool, to be prosecuted for drug use, to receive longer sentences, to be discriminated against in housing, to be denied job interviews, to be rejected by doctors’ offices, to suffer bias in almost every measurable sector of daily life.” The statistics tell their own story – and yet around 50% of white Americans today say that discrimination against whites is as big a problem as discrimination against blacks.

Which narrative feeds the hate and vileness spewing from the neo-Nazis and white supremacists who turned up in force last weekend in Charlottesville. And whose views and actions are given succour by the reaction of the American president. White separatist David Duke declared that this show of unity by the alt-right “fulfils the promises of Donald Trump.” The statements by Trump since Charlottesville have been quite simply shocking. Despite a half hearted attempt to condemn racism, he has doggedly held on to his narrative of “many sides” being responsible, thus effectively equating out and out hated-filled racism with protest, and lamented the removal of the “beautiful” statues and monuments that celebrate and glorify the defence of slavery – structures that for the most part were erected long after the civil war to bolster the Jim Crow system and opposed the Civil Rights movement.

Michael Eric Dyson is worth quoting at length here:

“Such an ungainly assembly of white supremacists rides herd on political memory. Their resentment of the removal of public symbols of the Confederate past — the genesis of this weekend’s rally — is fueled by revisionist history. They fancy themselves the victims of the so-called politically correct assault on American democracy, a false narrative that helped propel Mr. Trump to victory. Each feeds on the same demented lies about race and justice that corrupt true democracy and erode real liberty. Together they constitute the repulsive resurgence of a virulent bigotocracy.

This bigotocracy overlooks fundamental facts about slavery in this country: that blacks were stolen from their African homeland to toil for no wages in American dirt. When black folk and others point that out, white bigots are aggrieved. They are especially offended when it is argued that slavery changed clothes during Reconstruction and got dressed up as freedom, only to keep menacing black folk as it did during Jim Crow. The bigotocracy is angry that slavery is seen as this nation’s original sin. And yet they remain depressingly and purposefully ignorant of what slavery was, how it happened, what it did to us, how it shaped race and the air and space between white and black folk, and the life and arc of white and black cultures.”

We’re grateful for the music artists that are prepared to stand firmly against all of this. Wilco, for example, has just released a song in the wake of last weekend’s unrest. It’s called All Lives, You Say and takes on the “All Lives Matter” slogan which seeks to protest the Black Lives Matter movement.
“I can see you are afraid
Your skin is so thin
Your heart has escaped
All lives, all lives you say

…But you don’t know how to sing anything anyway
So all lives, all lives you say”

We can applaud too the broad coalition of local faith leaders called the Charlottesville Clergy Collective who resisted the racism in their town last weekend. “I’m trying to lead a church whose Christian identity leads my members to their politics, and not to have their politics lead them to the church,” said Rev. William Peyton, Rector of St. Paul’s Memorial Church, a mostly white Episcopalian congregation.

Blessed are those who hunger and thirst for justice

They are reflecting the God revealed in the Bible as one who “loves justice” and cares for the poor and oppressed. Just read the Psalms and the Hebrew prophets if you’ve any doubt about that. Jesus declared those blessed who sought after justice and peace. The apostle Paul said that a key component of the gospel for him and the other Christian leaders was “remembering the poor,” and that the kingdom of God consisted of “justice, peace and joy.” He also said that equality in Christ trumped all human divisions.

That being the case, “We all gotta be careful, how we treat one another.” And Josh White in Free and Equal Blues: “Every man, everywhere is the same, when he’s got his skin off…That’s the free and equal blues!”

To quote Nicholas Kristof again:  “A starting point is for us whites to wake from our ongoing mass delusions, to recognize that in practice black lives have not mattered as much as white lives, and that this is an affront to values that we all profess to believe in.”