Richard Thompson at the Ulster Hall: 7 Things We Learned

“The finest rock songwriter after Dylan and the best electric guitarist since Hendrix.” Los Angeles Times. 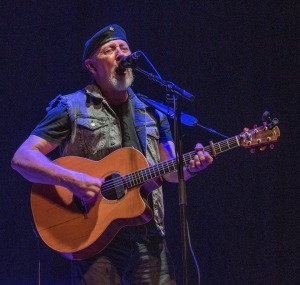 Richard Thompson, looking fit and healthy, gave a rousing solo acoustic performance in the rather grand surroundings of Belfast’s Ulster Hall, getting a standing ovation from the delighted audience. He’s an iconic figure, featuring on Rolling Stone’s “100 Greatest Guitarists of All Time,” winning a Lifetime Achievement Award from the Americana Music Association in Nashville, several Grammy nominations and an OBE.

He was part of the English folk-rock band, Fairport Convention in the late 60s and early 70s before launching a successful period with Linda Thompson and then his solo career, which has seen him release 18 studio albums and play with a who’s who list of major rock artists and his songs covered by artists like Emmylou Harris, David Gilmour and The Blind Boys from Alabama, Elvis Costello, Bonnie Raitt, and Don Henley. His 18th album, 13 Rivers was released in 2018 to great acclaim.

Here’s what we learned:

1. A Richard Thompson concert is far from old minor key English folk songs and sea shanties. Yes, there’s folk, but with a huge variety of styles and tempos, and some full-blooded rock’n roll too, all peppered with self-deprecating banter and humour. It makes for a fine evening’s entertainment.

2. Sometimes you need more than three chords and the truth. And with Richard Thompson, you get a kaleidoscope of chords, runs, fills, arpeggios, harmonics and more, in a virtuoso display of guitar playing that will have your jaw dropping and your foot a-tapping.

3. Who needs a band, when you play bass, chords and lead, all at the same time, with great attack and panache to accompany your impressive vocal performance?

4. Lowden acoustic guitars “are the best out there, if you ask me,” said Thompson, praising the highly acclaimed Northern Irish luthiers. On the evidence of this masterful display of guitar wizardry, there can’t be much argument.

5. It’s great to have a trademark – in Richard Thompson’s case, his black beret, which he hasn’t taken off since 1984 (just joking!). His other trademark, of course, is his terrific song-writing skills, aptly demonstrated in song after song from each decade of his long career. Musically rich and lyrically clever, with wit, sarcasm, and great story-telling, the songs’ music and lyrics interweave powerfully.

6. Forty and fifty-year-old songs can still be magical. Thompson’s Bright Lights which “brushed the lower regions of the Top 40” in 1974, along with Dimming of the Day and Sandy Denny’s Who Knows Where the Time Goes, all stirred great memories and were warmly received by the enthusiastic Belfast crowd. Songs that stand the test of time.

7. In your 8th decade, you can still look fit and robust and give nearly two hours of fabulous entertainment, singing and playing your heart out. It helps, clearly, if you play tennis and cricket regularly.

Oh, and the sweet, sweet voice and song writing talents of Katherine Priddy who was the evening’s support deserves a mention. One to keep an eye on.