Rev. Gary Davis – “one of the really great geniuses of American instrumental music”

Posted by gwburn1 on September 5, 2019
Posted in: Uncategorized. Leave a comment

Rev Gary Davis is “one of the greatest figures of…twentieth century music.” 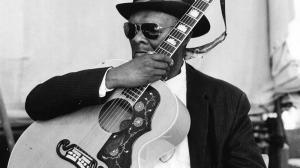 I’ve been trying to learn a couple of Rev Gary Davis songs on my guitar of late (helped by the wonderful Ernie Hawkins tutorials) and can report that they are fiendishly tricky to get under your fingers – especially for a modest player like myself. I’ll not be posting YouTube videos of myself anytime soon (to your great relief!).

He is surely one of the most under-rated guitarists of all, inexplicably not featuring in Rolling Stone Magazine’s 100 Greatest Guitarists of All Time list. And how often do you hear his name mentioned when you and your friends are discussing great guitar players? I suppose acoustic guitar players don’t tend to be mentioned as often as the great electric players, but even given that, overlooking Gary Davis’s skills is very remiss.

That’s not to say that there haven’t been some notable accolades from significant sources:

Bob Dylan said Davis was “one of the wizards of modern music.”

Bob Weir (Grateful Dead) said he had “a Bachian sense of music which transcended any common notion of a bluesman.”

Alan Lomax called him, “one of the really great geniuses of American instrumental music, a man who belongs in the company of Louis Armstrong and Sidney Bechet.”

Although he shared with Robert Johnson incredible guitar chops and musical nous, in important ways, Davis was the exact inverse of Johnson. Johnson was said to have sold his soul to the devil in return for his guitar skill – although of course this has been debunked as a myth arising from a old African folk tale about the crossroads magic, told to try explain Johnson’s rapid improvement in his mastery of the instrument (the truth is much more prosaic – see our review of Conforth & Wardlow’s recent Johnson biography).

Nevertheless, Johnson did have a very negative attitude to religion, blaspheming vehemently when drunk and had a penchant for hoodoo. Davis, on the other hand, spent his life as a Baptist minister, seeking to save souls, and refusing to sing the blues in public for most of his life, even though that decision likely cost him professionally and economically.

Gary Davis’s guitar playing and all-round musical skill is all the more remarkable given he was blind and born into deep poverty. His near complete blindness seems to have been caused during early childhood, by the lack of proper medical care. “I could tell the look of a person, but to tell who it is, I’m not able to do that,” he said in later life. Davis was born in 1896 to poor sharecroppers in South Carolina. He was the eldest son of his mother’s eight children, all the rest of whom died young, most in infancy, again the result of non-existent medical care for black communities.

His father was often in trouble and ended up shot dead after reportedly slitting a lover’s throat. His mother, it seems, was also a philanderer and had no time for her children, and abandoned young Gary to his grandmother’s care, causing considerable him considerable emotional turmoil, which we can surmise persisted throughout his life: Ian Zack says, “It’s surely no coincidence that the themes of death, abandonment, the lost child in the wilderness and a reunion with his mother ran through Davis’s gospel message and music.”

“I felt horrible about it ‘cause I felt like I was throwed away…Because of the way she talkin’ to me, she’d wish that I were dead. She tell me that a heap of times.”

Of his blindness and the absence of parental love, in There Was A Time That I Was Blind, on his 1961 American Street Songs album, Davis sings,

“It’s so hard I have to be blind

And nobody cares for me”

Davis’s grandmother was a Christian woman and taught young Gary the various spirituals he would reprise throughout his career. She took him to church, the Center Rabun Baptist Church, where he sang in the choir. Services were lively, with shouting, hand waving and foot stomping, fiery preaching and enthusiastic singing. Davis became a keen musician as a child, first of all mastering the blues harp, then the banjo and then guitar. Before long he and the guitar were inseparable. Davis said his first memory of hearing a guitar was that it sounded like “a brass band coming through.” If you’re at all familiar with Davis’s music you’ll understand that this is exactly what he ended up doing with his guitar playing, where he plays lead, rhythm and bass parts all at once, mimicking an entire band.

Davis’s first marriage as a young man to Mary broke up, Mary leaving him for another man – another abandonment to add to that of his mother’s, which led to a downward spiral for David into heavy drinking and rambling, playing the blues on the streets, in barrelhouses, country jukes, dancehalls and private parties.

His life was to turn around however in 1934 when he had a kind of vision of both a fowl and a young child vying for his attention. For Davis this was the devil versus an angel which was beckoning him to God. Right then, Davis said he surrendered and gave up to God – “give up entirely.” He was ordained at the Free Will Baptist Connection Church within 3 years, and was soon known as the Reverend Gary, from this point on harnessing his considerable guitar prowess in the service of encouraging the faithful and saving souls.

His song Great Change Since I Been Born highlights the practical difference faith brings – “since I been born,” of course referring to the idea of coming to faith as a “new birth,” as per John’s gospel chapter 3. That “road I used to walk, I don’t walk no more,” he sang, and, like the author of Psalm 40, he had a “new song.”

Davis’s commitment to his faith and refusal to sing the blues cost him dearly and ensured his talents largely remained hidden until the ‘60s when he was “discovered” in New York City. A college student who heard Davis play at that time said of him, “He was really an uplifter, [trying to get everyone] to focus their attentions on things other than their immediate frustrations.”

And there, I think, we’re at the heart of Davis’s faith. He had his faults and acted in quite un-preacherly ways at time – cussing, heavy drinking, eventually singing some bawdy blues songs and toting a gun. But his own life, lived in poverty and the restrictions of his blindness, and the experience of early abandonment led him to embrace a faith that helped him transcend the racism, the poverty and all the rest of the difficulties he experienced. And part of that was the hope that there was something beyond this life – songs like I’m Going to Sit on the Banks of the River, Twelve Gates to the City, Soon My Work Will All Be Done, I’m Gonna Meet You at the Station are all about the Christian believer’s heavenly hope.

That’s been on my mind a bit of late – someone I’m close to is likely close to the end and it sure is sobering to hear the doctors talk frankly and in some detail about his dying. His faith, however, is luminous, the product of a life well lived with a deep trust in God’s grace.

Gary Davis’s Death Don’t Have No Mercy is a stark reminder of the reality of what lies ahead for all of us. The New Testament writer Paul saw death as an enemy, and it surely is. But the resurrection of Jesus, he said, means that the sting of this last enemy has been drawn, its victory nullified, with the result that “mortal bodies [will] put on immortality.” So – Paul again – “if for this life only we have hoped in Christ, we are of all people most to be pitied.” But, he goes on to say, there is indeed reason to hope for more, because of the resurrected Jesus.

Christians believe there is hope in the here and now. But, ultimately, it becomes important that there can be hope beyond the here and now. The question for all of us, as Bob Dylan puts it, is “Are You Ready?”