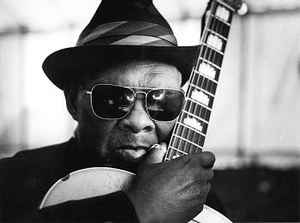 We’re talking about Rev. Gary Davis, the blind son of dirt-poor sharecroppers in South Carolina, who went on to exert a major influence on the folk scene of the 1960s and the early rock scene of the 70s. Yet for most of his career, he refused to perform blues music publicly until the latter years of his life.

He was remarkably musically gifted and his guitar virtuosity was an inspiration to people like Jorma Kaukonen, Bob Weir, Stefan Grossman and many others. Davis was born in 1896 in the Jim Crow South Carolina, became blind as a small child, and was abandoned by his mother. Raised in poverty by his grandmother, it was a thoroughly unpromising start. But she made sure young Gary went to church where he sang in the choir. He took up the guitar early, playing spirituals in earshot of his grandmother and other songs learned from traveling minstrel shows when she wasn’t listening,

He began to have real success as a musician in his late teens at picnics and in string bands, then playing on street corners for nickels and dimes, eventually adopting the rambling lifestyle of the wandering bluesman. But, at the age of 38, when his mother was dying, Davis experienced a vision, where an angel, appearing as a child, called him to God. Right there, he says, he “surrendered and gave up. Gave up entirely.” He soon was ordained as a Baptist minister.

He now harnessed all the musical skill he had amassed in playing ragtime, jazz, blues, and minstrel music and his considerable creative energies in composing and playing spiritual songs in pursuit of his new calling in life. There had been a great change.

One of Gary Davis’s song which reflects this is simply called Great Change Since I Been Born, and I got to thinking about it, when a good friend of mine, Gary Bradley, an Irish musician, sent me a recording he had made of the song for use in the book launch of my new book.

The reason I wanted the song is because my book, Paul Distilled is about the thinking of the apostle Paul, whose letters form part of our New Testaments. He, too, experienced a great change – from a man of violence to a man promoting love and peace, because of his own encounter with God. Specifically, meeting the resurrected Jesus on the famous Damascus Road. In his letters, it’s clear that he thought the epoch-shattering event of Jesus’s resurrection meant the possibility of transformation – both personally and for the world. A transformation based on love. These short thirteen letters of Paul dropped a depth charge of thought into the ancient world, whose effects are still being felt in the world. Can love really change the world? According to Jesus, and the greatest exponent of the meaning of his life, Paul – a resounding Yes!

Gary Davis eventually made has way to New York City, where his incredible skill and talent became appreciated and where he was eventually persuaded to perform more than just spiritual songs in the 1960s Though his faith was still intact, the good Reverend clearly struggled with alcohol and was known to be pretty foul-mouthed and angry at times. As Bob Dylan observed in Solid Rock,

“It’s the ways of the flesh to war against the spirit
Twenty-four hours a day, you can feel it and you can hear it”

He was reflecting, of course, St Paul’s letter to the Romans, where he talks about doing the things he doesn’t want to do and not doing what he knows he ought to do. We’ve all been there. The good news, is that a great change is possible. A life empowered by the Spirit of Jesus “is life and peace.” The secret is, in Gary Davis’s words, to “surrender and give up. Give up entirely.”