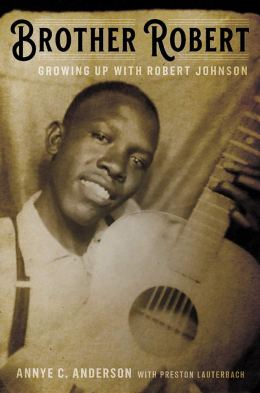 Eighty-two years after his death at the tender age of 27, Robert Johnson still fascinates us endlessly. Earlier this year we had Cornforth and Wardlow’s meticulously researched biography, Up Jumped the Devil: The Real Life of Robert Johnson, which laid to rest once and for all the selling his soul at the crossroads myth.

Now we have Brother Robert, memories of Robert Johnson from Annye Anderson, Johnson’s almost sister. Mrs. Anderson is a daughter of the first husband – Charles Spencer – of Johnson’s mother, Julia. So they weren’t blood relatives, but, given the amount of time Robert spent in Memphis with Spencer family and the extended nature of families at the time, Robert and Annye were clearly close.

Annye Anderson introduces us to the Robert Johnson we never knew. As a little girl, she knew nothing of Johnson’s rambling and alleged womanizing and drinking. Through Annye’s memories of life in her home and her sister Carrie’s home in Memphis, we meet an entirely different Robert Johnson. He’s a caring, older brother, who loves to entertain children, loves to go to the movies and loves his food. He’s a boy beloved by his mother and who loves her dearly in return.

As far as Annye is concerned, some of the stories about Johnson were invented by bluesmen who knew him but who would be happy to pass on a mere story for the white man’s dime. She admits though, that she never had Robert “in her pocket” – there were parts of his life, as a young girl, she knew nothing about.

Although we’re interested in Mrs Anderson’s anecdotes about Robert Johnson, her memories in general are a wonderful evocation of a time and place. The Memphis of the 1920s and 30s was a lively place, but the Depression was in full swing during Annye’s childhood, so you get a vivid sense of the harsh realities of life – the hardship of life as a sharecropper, having to grow your own food, sharing that with neighbours, not being able to afford Christmas presents and the lack of educational opportunities. It was the era of Jim Crow and lynching, too, and Annye tells the story of her father having to flee for his life from Hazlehurst to Memphis.

But there was love and joy in this family too, and Mrs. Anderson’s happy reminisces enable us to imagine brother Robert’s natty pin-striped suits, his panama hat and polished patent leather shoes, as well as the pomade he wore in his hair. He was a slinky dancer, too, with all the moves. For Annye, Robert wasn’t just a bluesman – he played spirituals, folk songs, and gospel too, as well as songs he picked up and sang from the films he saw. Not just content with “classic blues,” she tells us her Robert was “contemporary.” Given his extraordinary talent, it makes you wonder where his music might have taken him – and us – had he been permitted to live.

The association that grew up between Johnson and the devil is something entirely foreign to Annye Anderson. She tells us of the two ministers of the gospel in the family and says that Robert’s mother’s strong Christian faith meant that “he couldn’t have lived round Mama Julia without being baptized.” And then there is the note the family received, written by Johnson before he died – a quite remarkable “deathbed testimony.” “Jesus of Nazareth, king of Jerusalem. I know that my redeemer liveth and will call me from the grave.”

The second half of the book concerns the discovery of Johnson’s music from the 1960s on by white artists. It’s an appalling story of the exploitation of a poor black woman, Sister Carrie, by two white men who took her photographs and Johnson’s music, promised much and delivered little. Given the United States’ history of racism, perhaps we ought not to be surprised, but, nevertheless, Annye Anderson’s forthright account is quite shocking.

For any music fan, and particularly if you’re a blues fan, this book is a must-read. It’s beautifully written and laid out, and sheds new light on the man whom Eric Clapton said had driven and influenced all of his life, and in many ways, it puts the record straight. In addition, it has a number of never-before-seen photos and postcards, including a new, genuine photograph of Robert to add to the two we already know of. It’s a highly engaging insight into something of Johnson’s character and background by the last living person who knew him.

Annye Anderson, now 93, is a retired educator and administrator of the Boston Public Schools in Massachusetts and has written the book about her brother with the assistance of Preston Lauterbach, journalist and author. There is an excellent forward by Elijah Wald, blues music historian and guitarist, and the transcript of an interview with Mrs. Anderson when she is joined by Lauterbach, Wald and Peter Guralnick.