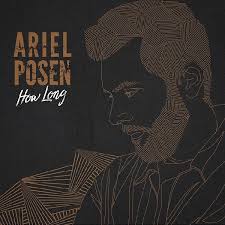 Ariel Posen, member of the Juno Award-winning band, The Bros. Landreth, has released a solo album which gives full rein to his talents as a singer/songwriter and top-notch guitarist. How Long is a terrific solo debut, ten original songs of melodic rock and roll and bluesy Americana.

Posen has spent a life in music, playing guitar since he was 9 years old, and his long experience and musical chops are on full display in this new album. He’s a fine singer with a sweet voice but which is versatile enough to shine on the rockier numbers. There’s plenty for guitar fans as well, although as Posen says, “The guitar is the tool to get the music out. Always serve the song first. Otherwise, you’re just playing an instrument.”

We get some excellent electric slide work in both Fade, and Can’t stop thinking about you, and there are three short instrumental tracks – Daybreak, featuring an atmospheric resonator/slide guitar, She Knows, with its sparse electric guitar’s repeated riff and Hollow Hour, a one-minute contemplative piece. Then there is Get You Back, where the vocals are set against discordant guitar chords which resolve into a melodic chorus and then morphs into an extended Hendrix-like solo

A number of the songs have some lovely harmonies adding to the laid-back vibe, including Things That I’ve Said and the quieter How Long, with its John Mayer hints. Better Late Than Never Slow, a slow burner of a song, has beautiful harmonising vocals, which eventually give way to a lovely gut-wrenching guitar solo.

How Long is hugely enjoyable, musically sophisticated and highly recommended.