Brian Hiatt, Bruce Springsteen: The Stories Behind the Songs 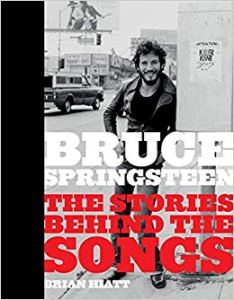 If you’re a Springsteen fan – or indeed a music fan of any kind – waste no time: get yourself a copy of this book! Even if you’ve read a Springsteen biography or the Boss’s own memoirs (Born to Run), this is a must-have, a hugely entertaining read, for both the information packed into it and the fabulous set of photographs.

Hiatt takes every officially released Springsteen album (aside from the Seeger Sessions) in turn and comments eruditely on each of 300 songs, with stories about the song’s provenance, aspects of its recording and various other pieces of background material, as well as discussing relevant aspects of Springsteen’s own history. He takes it from 1973s Greetings from Ashbury Park, N.J. to 2014’s High Hopes and includes all the songs which were later released on outtakes sets such as Tracks and The Promise. The author has said that he hopes the book would “expand the historical record,” and that it certainly does.

Hiatt is a Senior Writer for Rolling Stone magazine and has conducted a number of interviews with Springsteen. He draws upon these and many hours of conversations with Max Weinberg, Nils Lofgren, Roy Bittan and numerous other musicians and Springsteen album producers. The result is a detailed, but utterly fascinating insight into Springsteen’s body of work, a set of songs that have not only been important to millions of fans around the world, but make an important contribution to rock’n’roll, and arguably, modern Western culture.

As you might expect from a journalist of the calibre of Hiatt, the writing is superb – detailed, but well-paced and highly engaging. There are fascinating facts and anecdotes on every page – we learn about the people and events who were the inspiration for various songs; New York City Serenade’s debt to Van Morrison’s Astral Weeks; the way in which Springsteen would channel popular radio songs into his compositions, from Duane Eddy to Little Eva to the Ronettes to the Beach Boys to James Brown; the movies and books that proved inspirational for Springsteen; and lots of fascinating little snippets like Springsteen often singing Cadillac Ranch in the voice of Richard Nixon during rehearsals. 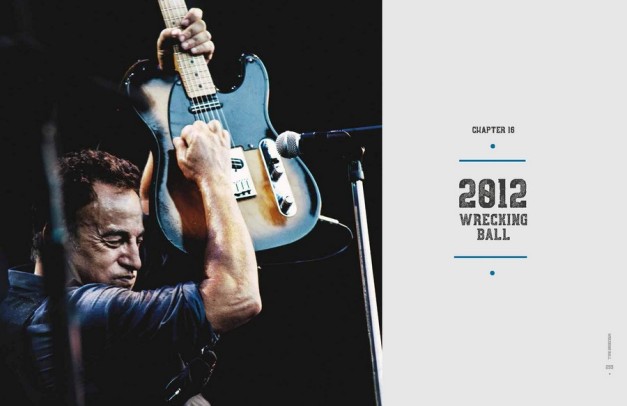 I found myself listening again to all my Springsteen albums – from vinyl to CD to downloads – as I read each chapter, listening out for the features Hiatt was drawing attention to. In his comments on Badlands from Darkness on the Edge of Town, we learn that the song’s opening riff reflects the Animals’ 1965 hit Don’t Let Me Be Misunderstood, which in turn had been built on a string part from Nina Simone’s earlier version of the song. Before finishing the paragraph, I was off to Spotify to hear for myself. All this slowed down my reading of the book, but it helped me savour the feast of intriguing background information that Hiatt supplies.

The photographs in the book deserve special mention – all 180 of them, all wonderful in their own way, tracking both Springsteen’s own development over the years and the times through which he has lived. My personal favourites are a black and white one by Mark Weiss which appears on a double-page spread in the book of Springsteen, Clemens, Tallent and Van Zandt at the Spectrum in Philadelphia in 1980 and Rick Diamond’s photo of Springsteen in mid-air during the Wrecking Ball tour. There is much to savour.

The book is in large format with lovely, quality paper and is a complete treasure trove of Springsteen information in what amounts to an intimate portrait of the Boss through the lens of his songs.