Jimmy “Duck” Holmes: “People think of blues as hard times and sadness, they don’t look at the soul behind it”

Jimmy “Duck” Holmes is the proprietor of the historic Blue Front Café in Bentonia, Mississippi, and exponent of the Bentonia style of blues guitar. The Blue Front was started by Holmes’s parents eighty years ago and is the oldest remaining juke joint in the state. He only started his recording career in 2003 at the age of 56, and the recently released Cypress Grove is his 9th album. In 2016, the United States Postal Service issued the Mississippi Statehood Commemorative Forever Stamp that featured a close-up rendering of Holmes’s hands. 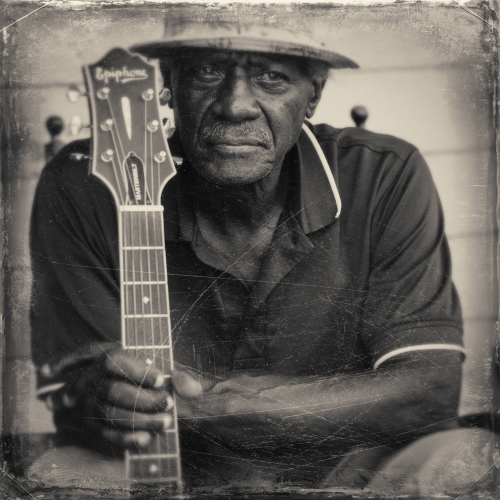 Down at the Crossroads got talking to Jimmy about his life and the new album, which was produced by Black Keys frontman, Dan Auerbach, and features musical support from Auerbach and members of his band, Marcus King, Eric Deaton and Sam Bacco. The result is a raw explosion of genuine Mississippi juke-joint blues, with 11 traditional Delta blues songs from Holmes’s extensive repertoire. It’s fabulous stuff, a treat for any blues fan.

Holmes says, “I want to play this music as much as I can because I want younger people to see it and get the passion for it and carry it on. It’s important. It’s blues, so it’s the foundation all American music was built on. I thank God for being blessed enough to be able to have the opportunity to create music that stays true to those old guys who taught me, and that people appreciate it. I’ve never cared for being famous or wealthy. But as long as I live, I’m gonna be on a stage somewhere, singing the old-style country blues.”

Down at the Crossroads had the opportunity to chat to Jimmy about the new album and about a life in the blues. I congratulated him on Cypress Grove and asked if he was pleased with the way it’s turned out. Modestly he replied that he doesn’t really get excited too easily these days, but “I’m 100% appreciative that people like it, it’s something that the blues fan likes. And I’ve had a lot of complements about the album since it’s been released.”

I asked about the recording of the album, and the involvement of Dan Auerbach of the Black Keys.

“Yeah, he was instrumental in making it all happen. It started about three years ago he kept wanting to see if I would come to Nashville to his recording studio [Easy Eye Sound Studio], and I didn’t think much of it. Got on me again last year, but at that time, they didn’t go into what they wanted me to do. I thought they wanted me just to come up and socialize, I had no idea they wanted me to record. But they wanted me to come and play, and I said, if they want to hear me play, they gotta come to Bentonia. But anyways, after about two and a half, three years, it worked out and they had a schedule for recording of three days.

The album is on own Dan Auerbach’s own label, Easy Eye Sound. Auerbach has been a long-time supporter of the blues that inspired him as a young musician, and says, “I like to work with people who inspire me, and Jimmy inspires me. Jimmy’s music is rough and tumble, and it can shatter a lot of preconceptions purists have about Delta blues. At the Blue Front, you never know who’s going to show up, or what instrument they’ll be playing. There could be three guitars, bass, drums, mandolin, and fiddle one weekend, and then the next weekend a banjo player or a saxophonist shows up. So the sound always reflects the ages and experiences and styles of the musicians who are there, and that keeps it fresh, modern, and totally unpredictable.”

Holmes said of working with the Auerbach team, “Matter of fact, every track I laid down, they’s in the background. But they never tried to override me. They backed me up, but never tried to override me sound-wise. I give them credit for that.” He clearly enjoyed working with the guys – “Not one single time did they order me around or direct me. They wanted me to be myself. They never acted like they were producing me. They wanted to make sure I felt I was in control.”

I mentioned how much I’d enjoyed the couple of Skip James songs on the album. The first song is an excellent version of the Skip James classic which Holmes simply calls Hard Times. It’s appropriate that this is the song that kicks off the album, Skip James being perhaps the most famous Bentonia bluesman. James’ haunting, hypnotic open-minor chord style of guitar playing was learned from Bentonian Henry Stuckey, who had learned the tuning from black Bahamian soldiers he’d met in France during World War I. When he returned home, Stuckey taught it to his brother Jacob, Skip James and Jack Owens.

Jimmy Holmes told me, “Strangely enough, I was introduced to the guitar…oh, 1957…by the guy who started the Bentonia sound, Henry Stuckey. He actually didn’t teach me, but his guitar was the first guitar I laid hands on. And that laid the seed in me to learn to play the guitar. I didn’t actually learn from him, I learned from a few more guys, Jacob Stuckey, Jack Owen, Cornelius Bright – they all played the same style of guitar.”

For Holmes, learning the Bentonia blues style seemed like some kind of divine intervention. “Jack Owen, it was the 1980s or early 90s, and he was determined that I would learn that particular style. He didn’t read or write, but he would come every afternoon and teach me by sight. He didn’t know an A chord or a C chord or D, and I think I frustrated him, because he would talk to me and tell me to watch what he was doing, to watch his fingers.” But eventually, through Owen’s determination to insure insuring that this old form of blues would not be forgotten, Holmes caught on to what Owen was doing – “caught on like wildfire.” 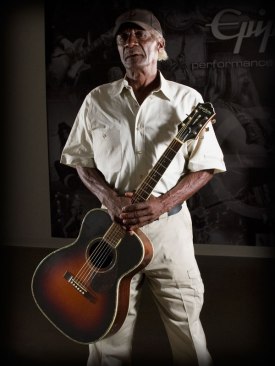 Holmes only started performing to an audience about 20 years ago. “I would sit in and play at Blue Front with the regular customers before that,” he said, “but the first time I really got paid was 1999.” Not that he ever really has had any ambition to play for money, or indeed, considers himself a professional musician. He had “a day job at the local school district. But I would always play the guitar off and on.” He is, of course, the proprietor and manager of the Blue Front Café, which had been opened in 1948 by his mother and father where they served cold drinks and offered live music. Holmes took over the Blue Front in 1970, where he continues to preserve and promote the blues, seven days a week.

I said to him that I’d read he’d once said, “If the Blue Front could talk … boy, could it tell some stories.” He agreed and said, “I could sum it up by saying, the Blue Front Café was a place people came to socialize, people came to hang out. It’s like a big living room in the house with a big back door, like the back yard of your house, and conversation might be about anything.”

I asked Jimmy about the blues, and he referred to the Bentonia guys he grew up listening to.

But, I suggested, when you listen to the album, there’s a good vibe about it, it’s not down-hearted blues. So, can the blues be upbeat as well?

This blues music has been around for a long time, so what, I wondered, is the enduring appeal of the blues? Why does it appeal to a new generation?

“Well, he told me, “it’s the foundation of it all. Each generation takes it to another level. They take it and build on it.” The blues won’t stay static with each new generation, and today’s younger generation won’t play “the type we talking about. They might take a couple of pointers from what we do, but they won’t keep it the same.”

But he was insistent that it takes more than musical skill and ability to play the blues. He knows some of today’s artists who “are real good guitarists, and they play some old school blues, but you can’t do it authentic, if it’s not from the heart. If you’re not playing for what you feel, it’s just not there. Even if you’re playing it effectively, it’s not true. Blues, the type I play, you gotta feel it. Deep down in your heart, you gotta feel it.

“The guys I learned from, they didn’t play guitar and sing because it was something you wanted to hear, they played because that was what they felt.”

I reminded him that Willie Dixon once said, the blues is the truth and asked if he agreed with that? “Yeah I talk about that sometimes. The blues guys I knew, they wrote the lyrics though most of them couldn’t read or write. The lyrics were something they had experienced, or they knew someone had experienced and put music to it. Even though we were perfectly entertained by those guys, that wasn’t their purpose.” Their purpose was to “tell their story. If you were entertained that was fine, but that weren’t their purpose.”

Having talked to a couple of other septuagenarian blues artists [Chris Smither; Rory Block] recently, I thought I’d ask Jimmy, finally, about the process of getting older. “I’m 100% appreciative. I got a song – can’t remember what CD it’s on – and it’s got a line, ‘if you keep on living, you’re gonna get old some day.’ You get up in the morning and look in the mirror and you know I’ll be bald or grey! You gonna be old some day. Bottom line – the day you was born, you gonna get old. The day you come in here, you on your way out!”

So, he agreed, the way to handle it was to keep on being positive. Good advice.

Thanks, Jimmy Holmes, for a fascinating insight to the Bentonia blues.