Along with Robert Johnson, Charlie Patton was arguably the most important and formative voice of the early sound of the blues in the Mississippi Delta. Patton’s recordings powerfully influenced subsequent generations of musicians and today, even nearly 90 years after his death, his music remains important. Robert Palmer in his Deep Blues, said that Patton was a musician who “still informs, entertains and moves listeners all over the world.”

Robert Sacré, a specialist in African American music, assembled a group of blues scholars in 1984 to consider Charlie Patton’s life and music, and this book contains the output from that conference. It originally had a very limited print run but created considerable interest. This new edition makes the output available to a new audience and contains an update by David Evans to his contribution, which makes up the lion’s share of the book.

Along with Evans’ 100-page survey and analysis of Patton’s life and music, there are a couple of short introductory chapters on the genesis of the blues in Mississippi, and some chapters on the influence Patton had on subsequent blues artists, such as Howlin’ Wolf, Willie Johnson and other Chicago post-war blues artists. The late Luther Allison has also contributed a fascinating chapter on his musical influences, first in Arkansas and then in Chicago. The volume concludes with a piece by Professor Evans on the importance of Mississippi blues, which, he suggests, are “exciting and unpredictable,” because of the prevalence of repeated riffs, which remove it “from the twelve-bar rut that characterizes so many blues from other areas.”

Dick Shurman’s chapter which contains his personal memories of Howlin’ Wolf is a great read, revealing a Wolf who was “a particularly unforgettable individual,” and yet someone whom Shurman found to be full of contradictions and complexities. Although he was known to physically, mentally and financially abuse members of his own band, and his showmanship was at times bizarre, he lived rather sedately in later years and was wont to give out advice quite freely on how to live right. “Off the bandstand,” says Shurman, “Wolf was just a…defensive man trying to make his way in the threatening and confusing world.” Fascinating. 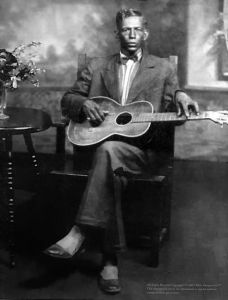 David Evans long essay entitled, Charlie Patton: The Conscience of the Delta, is a brilliant, concise account of Patton’s life, based on Patton’s songs and interviews with relatives and associates of his. Evans provides something of a corrective to the view – largely based on a Son House interview – that Patton was illiterate, a drunkard, a glutton, a hustler of women and an incoherent garbler. Evans sees Patton as having “special artistic sensitivity” and as an outstanding and innovative musician. He was not a stereotypical downtrodden, illiterate field hand, rather coming from a (relatively) prosperous family – his father sub-rented land to other farmers on Dockery’s farm and ran a profitable timber hauling business. Charlie likely had a quite good education – including a religious education, something that is evident from his performance and recording of gospel songs.

An important theme of Patton’s gospel songs was the afterlife and heaven – unsurprising, given the precariousness of life in Mississippi at this time. Patton had lost a brother and seven sisters as children, experienced the 1927 flood and saw many violent episodes in juke joints and house parties over the years. Death was ever present and the hope of something better up above was important. Patton himself, would have been seen as a sinner by other church goers, but, seemingly, despite his drinking and womanizing, spiritual matters were never far from his mind. Evans points to Patton’s life-long feeling that he was called to be a preacher. He actually preached on several occasions, and, according to his sister, Viola, taught others to preach. His favourite book in the Bible, apparently, was Revelation, especially the appearance of the holy city of heaven.

But of course, pre-eminently, Patton was a bluesman and an entertainer. He was a skilled singer and voice imitator, a fancy guitar player and a professional, itinerant musician. He travelled frequently and was never able to establish a stable family life, despite marrying several times. He achieved a considerable amount of fame during his lifetime, popular amongst whites as well as blacks, and travelled as far afield as Chicago.

But the Delta was his home and his stomping ground. Here he tried to be free, avoiding manual work like any ordinary black man of the time, constantly moving and playing his music. He survived a vicious razor attack, was subject to racial discrimination and spent time in jail, probably simply for being a witness to a crime. His was a tough life. Evans deftly explores the various contours of Patton’s life through examining various songs recorded by him, giving a fulsome portrait of the man and his art.

Patton died when he was only 50, and left a legacy of a mere 35 recorded blues songs. But his musical influence has been immense. Evans concludes that he “was truly the Masked Marvel,” whose “fame lives today, not only undiminished but grown greater.”