Diana Jones, Song to a Refugee 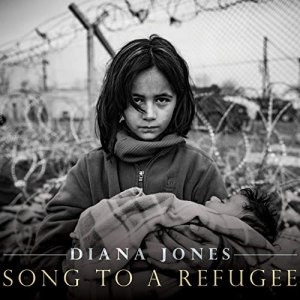 Song to a Refugee is a quite remarkable piece of work by singer-songwriter, Diana Jones – an album entirely given to highlighting the global refugee problem. It’s a serious listen – you’ll enjoy Jones’ acoustic, guitar-driven, folky Americana, but feel downright uncomfortable as she tells story after story about desperate people escaping war and violence and seeking refuge and safety.

Today nearly 80 million people around the world are displaced from their homes. Around 30 million people, over half of whom are under the age of 18, have been forced to flee their own countries entirely, because of persecution, war or violence. There are also millions of stateless people, who have been denied a nationality and access to basic rights such as education, healthcare, employment, and freedom of movement.

In today’s world, about 1 person is forcibly displaced every 2 seconds as a result of conflict or persecution.

In her 6th album, Diana Jones tries to give a voice to these asylum seekers. She said she wanted to “re-humanize the people who were being de-humanised by governments.” She’s done that in thirteen of her own carefully crafted songs, helped along the way by a number of guest contributors, including Richard Thompson, Steve Earle, Peggy Seeger and the Chapin Sisters.

The album starts with El Chaparral, with Central American refugees fleeing the “guns and the bombs and the war,” through Mexico, trying, “hungry and tired” to reach California, but unsure of how they’ll be received. Jones’s plaintive singing and the snatches of Mexico-evoking accordion sets the scene perfectly for the album.

We Believe You, featuring Steve Earle, Peggy Seeger and Richard Thompson, echoes Congresswoman Alexandria Ocasio-Cortez’s words “I believed the women,” when she visited a US border detention centre last year. She was referring to why the vulnerable women she had met had left their homes to seek asylum and the terrible conditions within the detention centre. The song ends by all the artists singing over and over, “we believe you.”

This is clearly massively different from the approach of the present US administration. Trump has said “our country is full.” And that he “hates taking asylum seekers.” And then his crude, “I guarantee they’re bad.” 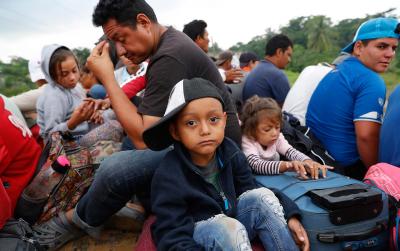 United States law enshrines the protections of the international Refugee Convention, drafted in the wake of the horrors of World War II. But, since 2017, Trump’s government has unleashed relentless attacks on the US asylum system and against the people who seek safety within its borders. Internal memos have revealed these efforts to be concerted, organized, and implemented toward the goal of ending asylum in the United States. From admitting nearly 85,000 refugees in 2016, on September 30, 2020 Trump’s administration proposed a new ceiling of just 15,000, a ridiculously low number.

Mama Hold Your Baby tells the tragic tale of a Guatemalan mother captured by US border guards and separated from her baby, the slow bluegrass feel with guitar and mandolin perfect for telling the story. The US administration admits to more than 2,500 children being forcibly separated from their parents at the southern border in 2018, although the true figure is likely much higher.

A number of the songs put the spotlight on refugee women. If we want to understand the problem, then Ask A Woman shows where we need to go – to a woman “with a child in her arms.” I Wait For You reminds us of the dreadful problem of child marriage that poverty forces and the love of a young mother for her children as she lives in a detention centre.

Jones clearly has the way the US deals with Central American refugees in mind, but the songs recognise that this is a global problem, and reference England and Europe too, The Sea Is My Mother, telling the story of a child perishing on one of the wretched little boats ferrying refugees from say, Syria or Africa.

The United States is not the only country with warped asylum and refugee policies and practices. The UK has been gradually decreasing its resettlement of asylum seekers since 2002 and recently the Tory government has been considering shipping asylum seekers to far-off islands and oil-rigs.

So well done, Diana Jones for this finely honed, challenging album. A quite wonderful set of songs, beautifully sung, at times haunting, at times heart-breaking and always challenging.