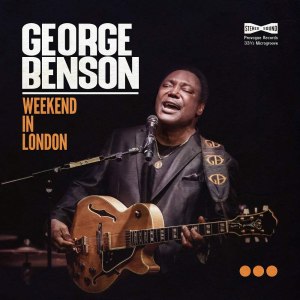 George Benson is something of a jazz icon. In a six decade professional career, he’s won multiple Grammy Awards, he’s got a star on the Hollywood Walk of Fame, been at the top of the jazz, R&B and pop charts on numerous occasions, and has earned every plaudit possible as a musician. He’s an outstanding guitarist and, still, in his late 70s, a great singer – silky smooth, sweet and quite magical.

His new live album, Weekend in London, captures a performance at Ronnie Scott’s Jazz Club in 2019. It’s an intimate gig, with a small number of fans who were able to savour a performance of a jazz giant who can fill much bigger arenas.

The performance includes many of the highlights of Benson’s career, with 1980’s US hit Give Me The Night, Love X Love and In Your Eyes. There are some fine covers, too, like Dave Bartholomew’s I Hear You Knocking and Donny Hathaway’s The Ghetto.

For those of us familiar with Dave Edmund’s version of I Hear Your Knocking, this slow, jazzy, bluesy version is something of a revelation. It must have gone down a storm live.

Michael Masser and Dan Hill’s In Your Eyes, which was a hit for Benson in 1983, showcase’s Benson’s velvet vocals in an emotional love song that stands the test of time.

We get but a few glimpses of George Benson’s guitar chops, but they creep in here and there, in Don’t Let Me Be Lonely Tonight, The Ghetto and Affirmation. For the most part, it’s Benson’s undiminished vocals and his fine band which take central stage.

It’s a crowd-pleasing show for sure, smooth and silky and, for many will be a welcome trip down memory lane, as George and his band revisit the soul and R&B of the 70s and 80s.

Tracklisting: Give Me The Night – Turn Your Love Around – Love X Love – In Your Eyes – I Hear You Knocking – Nothing’s Gonna Change My Love For You – Feel Like Makin’ Love – Don’t Let Me Be Lonely Tonight – The Ghetto – Moody’s Mood – Love Ballad – Never Give Up On A Good Thing – Affirmation – Cruise Control