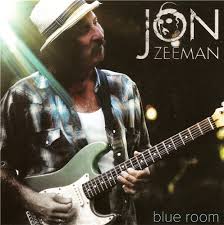 This is a very solid blues rock recording from the talented Jon Zeeman. It’s the fourth album from a very experienced musician who’s played in the past with the likes of Susan Tedeschi, Janis Ian and the Allman Brothers Band.

Zeeman gives us ten songs, eight of which are Zeeman originals, and then Robert Johnson’s Love in Vain and Jimi Hendrix’s Still Rainin’, Still Dreamin’. His arrangement of Love in Vain is very good indeed and quite different from other versions I’ve heard. It includes some cool blues piano and gives full rein for Zeeman’s nicely phrased vocals. The Hendrix track gives Zeeman the opportunity to show off his guitar chops and while there are clear echoes of Hendrix’s version, this is a new arrangement which works rather well.

The band, consisting of Phil McArthur and Zoe Zeeman on bass, Bob Taylor and Tom Regis on keyboards, George Lilly and Butch Trucks on drums, Bob Taylor on congas and Tom Regis on percussion, is top notch, with Zeeman’s smouldering guitar work to the fore throughout. The theme is classic blues throughout, but it’s so well done and the musicianship so fine, it’s never anything but absorbing.

Zeeman’s guitar gets down deep on If I Could Make You Love Me, one of those late night blues tracks that reaches right inside you. The Blue Room is a very short musical interlude featuring only Zeeman on guitar – I was just starting to really enjoy it when the track ended! The album closes out with Nothin’ In the World, an up tempo, funky number, with some cool keyboard work.

This is a very fine set of songs, featuring a very accomplished guitarist and a fine singer. Hugely enjoyable and worth checking out.