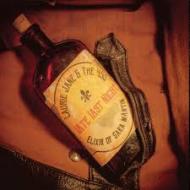 Louisville, Kentucky band, Laurie Jane and the 45s have done us a great favour with this release. It’s an album covering the recordings of Sara Martin, “the blues sensation of the West,” another Louisville artist, who was among the most-recorded of the classic blues singers. Sara Martin began singing on the African-American vaudeville circuit around 1915 and was signed by Okeh Records in 1922. Now largely forgotten, in her day Martin was a big star, performing around the United States as well as Cuba, Jamaica, and Puerto Rico. She toured and recorded with such performers as Fats Waller, Clarence Williams, King Oliver, and Sylvester Weaver. She was noted for her dramatic performing style, the diamonds in her teeth, and her lavish costumes, which she changed several times per show, and was billed as “The Famous Moanin’ Mama.”

Like many of the early blues artists, Sara Martin retired from blues singing to focus on the church. She returned to Louisville, where she opened a nursing home and sang in the local church gospel choir. When she passed away from a stroke at the age of 71, she was buried in an unmarked grave. Thankfully a proper headstone has now been installed.

Laurie Jane and the 45s lovingly present us with twelve of Martin’s songs, five of which are Martin’s own compositions, with arrangements that range from ones which conjure up an old-timey vibe, complete with a scratchy record feel (Pleading Blues, Strange Lovin’ Blue and Atlanta Blues) to rockin’ toe-tappers like Late Last Night and I’m Gonna Be a Sweet Lovin’ Old Soul to the aching slow blues of Blind Man Blues and My Man Blues.

Throughout we have a tight band, clearly loving every minute of what they’re doing and the shimmering, classic voice of Laurie Jane who channels her inner Sara Martin to great effect. The brass sounds are beautifully arranged, never overstated and are hugely effective on the wonderful Blind Man Blues, interplaying skillfully with the piano and vocals.

The album closes with ‘Tain’t Nobody’s Bus’ness If I Do, first recorded by Sara Martin along with Fats Waller on piano in 1922. It’s a first-class arrangement of the song, with an old-fashioned piano intro before the full band weights in behind Ms Laurie Jane’s swaggering vocals. It’s a blast, as is the rest of the record. A fabulous piece of work and highly recommended.