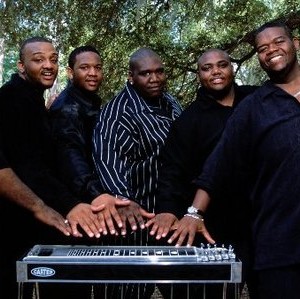 The Lee Boys are three brothers, Derrick, Alvin and Keith, who play along with their nephews, Alvin Cordy Jr., Earl Walker and Roosevelt Collier. Based in Miami, Florida, the band is a high-energy, funky, bluesy, sacred steel ensemble, whose live shows need to be seen to be believed, by all accounts. They are part Robert Randolph, part Holmes Brothers, and 100% the Lee Boys.

The Lee Boys were raised in the House of God denomination, and the church in which their father was pastor in Perrine, Fl., was a powerhouse in sacred steel driven gospel music. The brothers were schooled in the tradition by their uncle, Lorenzo Harrison, the steel guitarist at the Church of the Living God. They were originally a group of 4 brothers, but tragically Glenn passed away in 2012.

This new live album is the Boys’ debut on the M.C. label, features over an hours’ worth of performances from three concerts in 2018, and includes three new songs previously unrecorded by the band.

The songs pulse with contagious energy and inspiration, fuelled by Chris Johnson’s pedal steel and the band’s tight musicianship. Walk With Me clocks in at over 8 minutes (as you might expect with a live version) and is a world away from, say Eric Bibb’s I Want Jesus to Walk with Me. Same sentiment, but here it’s all funky rhythms and mesmeric steel slide soling.

Brother Joe May’s 1969 Don’t Let the Devil Ride gets a solid blues treatment, proving, if it ever needed it, that the blues ain’t the devils’ music. We’re right in the middle of the church with the next song, Praise Him, and we stay there for Come On Help Me Lift Him Up, both funky praise songs which must get any congregation or concert audience on their feet. 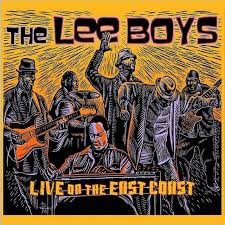 Turn On Your Love Light takes us outside the church with a broken heart song– “you left me, in the dark crying,” and is a little more restrained than the other songs, but still with a funky groove, the band’s rhythm section in fine form.

The album closes with Mississippi Fred McDowell’s You Got To Move, clearly in the Lee Boys’ hands a song about that great day of resurrection. We get some nice harmonica on this one from guest artist Isaac Corbert to augment the ever-present pedal steel, in what is a fiery version of the song.

There are some cool vocal performances throughout, with the lead singing backed by some nice harmony work. If you like your gospel funky, bluesy and rockin’, check out the Lee Boys, Live On the East Coast.