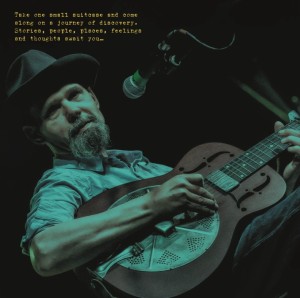 Mark Harrison is a London-based, blues-based troubadour, whose music making is fresh and original and whose songs are clever and compelling. He excels at intriguing you, making you tap your toes, and putting a smile on your face, with his distinctive style and memorable tunes.

With The Panoramic View, his fifth album (check out our review of Turpentine, his last album here), Harrison gives us fifteen original songs, all beautifully crafted, laced with humour and wisdom. All are driven by his fabulous acoustic guitar picking on his National resonator and 12-string guitars, and helped along the way by some nicely understated brass, which gives the songs at times a nostalgic feel without ever overpowering.

Harrison has an in-depth knowledge of the history of the blues which is evident in the stories of the songs and the echoes of the old acoustic masters like Mississippi John Hurt, Son House and Skip James throughout. Harrison channels these early blues influences, but doesn’t try to imitate too closely, creating his own, unique and thoroughly modern take on the blues. His connection to the blues is deep, down to the 1934 National Trojan he plays so skilfully, previously owned by Eric Bibb, one of his modern blues favourites.

The album has the unusual ingredient of a short verbal introduction to each song, which works surprisingly well and features the soft Scottish tones of Gail Porter, a UK TV presenter. Harrison is joined by his band, Charles Benfield (double bass) and Ben Welburn (drums and percussion), as well as Paddy Milner (piano), Paul Tkachenko (tuba, trombone, trumpet, mandolin) and Ed Hopwood (harmonica). The arrangements throughout and the sound quality is terrific.

The album gets off to a cracking start with One Small Suitcase, an up-tempo, piano driven, toe-tapping number where Harrison whisks us off from our lives into a new adventure. We then get some very cool songs that reference some of the blues masters – What Son House Said, with its steady alternating bass; Don’t Die Till You’re Dead, which quotes Mississippi John Hurt’s parting words to people; House Full of Children, about Eddie “Guitar” Burns from Detroit, who took multiple jobs to support his many kids; Rediscovery Blues, about the rediscovery in the 1960s of the old blues artists like Skip James, Mississippi John Hurt, and Son House; and Hooker’s Song, referencing John Lee Hooker.

In particular, I loved Don’t Die Till You’re Dead, with its John Hurt style picking and cool harmonica. It’s very topical, referencing people we come across who are inconsiderate, people who speak without thinking, people who have no shame, and who lie. “Ask yourself the question,” sings Harrison – “What’s so great about you?”

Two other blues-history related songs are High John and Ain’t No Justice. John the Conqueroo was a folk hero from African-American folklore, based on John the Conqueror, an African prince who was sold as a slave in the Americas. Despite his enslavement, his spirit was never broken and he survived in folklore as a sort of a trickster figure, because of the tricks he played to evade his masters. High John is a great, catchy tune, with neat interplay between piano and deftly picked guitar. Ain’t No Justice, with its cool resonator playing and slide work highlights the situation in which the blues grew up, that of Jim Crow in the American South: “There ain’t no justice down on the farm.”

As well as all this, we get a delightful short ragtime instrumental, Pool Meadow Strut, and the beautiful tune of Meet on the Other Side. There’s the usual Mark Harrison quirky humour on Mess is Everywhere, where the tuba accompaniment adds to the wry consideration of life having gone considerably south, Ragged, which is dedicated to all those who aren’t neat and tidy, and The Biggest Fool, a story about a man who’s been two-timed, featuring some very cool harmonica work.

John the Chinaman is another great song. It proceeds like the train steaming down the track, and tells the story of the thousands of Chinese who built the trans-continental railway in the 1850s. Wonderful stuff. And we get a nice slice of wisdom from Harrison’s pen in the closing Hooker’s Song. “It don’t matter what you think, it only matters what you do; That’s the only thing anybody’s ever gonna know about you.” Quite.

Mark Harrison is a supremely accomplished song-writer, guitarist and performer and The Panoramic View a satisfying feast of modern acoustic blues.