When asked “How does it feel to be the best guitarist in the world,” Jimi Hendrix replied: “I don’t know, why don’t you go and ask Rory Gallagher.” 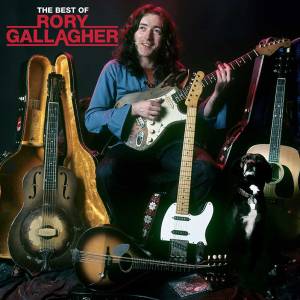 Hard on the heels of a slew of posthumous albums by guitar great Rory Gallagher, including the recent excellent Blues (2019) and Check Shirt Wizard – Live in ’77 (2020), comes The Best of Rory Gallagher, a comprehensive compilation of his most iconic songs compiled from across his recording career. These go all the way back to his first band Taste in 1969 and up to Gallagher’s final studio album Fresh Evidence in 1990.

If you go for the 2 CD version – and you ought to – there are 30 tracks for you to savour. If you’re not familiar with Rory Gallagher, this collection is a great place to start. This Irishman is ashamed to admit to not being as familiar as he ought to be with Rory Gallagher. As a schoolboy, some of my mates displayed their fandom by inscribing their names on their canvas schoolbags, along with Led Zeppelin, Jethro Tull and the like; but my youthful tastes at the time ran a bit more to Bob Dylan, Jackson Browne and Simon and Garfunkel, so Rory passed me by at that stage.

So The Best of Rory Gallagher puts things right for the likes of me.

Gallagher died in 1995, aged just 47, robbing the world of an incredible talent. Born in Ballyshannon, Donegal, he performed across the world in the 1970s and 80s, delivering blistering, marathon live performances and selling over 30m albums. After a musical apprenticeship in Irish showbands as a young man, he formed his own band Taste, which ended up supporting Cream and Blind Faith. Interestingly, in 1971, Gallagher was voted Melody Maker’s International Top Guitarist of the Year, ahead of Eric Clapton.

Clapton said that Rory Gallagher was the man who got him back into blues. Blues had been the music that had spoken to the young Gallagher, as he discovered Muddy Waters, Bill Broonzy and Lead Belly. And the blues very much defined his career, in both his covers of old songs and his many original compositions.

So, as you might expect, the blues are very much in evidence in this Best of collection. You can hear some terrific straight up blues in All Round Man, Calling Card, Walk on Hot Coals, Loan Shark Blues, Ghost Blues, Jinxed and Catfish. But a bluesy vibe pervades his playing and approach to most of the rest of the collection.

There are a couple of things you realize in listening to these songs – firstly just how versatile Gallagher was and what a good song-writer. As well as blues, there are songs like Calling Card, It’s Happened Before, It’ll Happen Again, and They Don’t Make Them Like You Anymore with a distinctive jazzy feel, the delicious Daughter of the Everglades is a kind of hippish Americana, and there are some songs in the straightforward rock or blues-rock category.

And, of course, you realize what an incredible guitarist he was. Clearly he could run up and down the fretboard of his Fender Stat at a mile a minute if he wanted to, but his playing was much more measured than that. It weaves in and out of the songs, he gives you solos that leave you wanting more, and he’s just . . . tasteful. And on top of all the wonderful electric work, there’s plenty to savour with Rory on acoustic guitar, either six- or twelve-string – check out Seven Days, Just the Smile and Out of the Blue, which has more than a nod to bluegrass.

On the second CD, there is a previously unreleased collaboration with Jerry Lee Lewis performing the Rolling Stones classic (I Can’t Get No) Satisfaction taken from Jerry Lee’s 1973 “London Sessions,” which brings out the full blues potential of the song.

Clearly in songs that date back to the late 60s, they’ll have the feel of a certain time and place, but the songs and Gallagher’s distinctive vocals and exceptional guitar playing more than stand the test of time. This is an outstanding collection of a wonderful body of work, and if for any reason you have no or little acquaintance with Rory Gallagher, don’t hesitate to get your hands on a copy of The Best of Rory Gallagher (UMC).