Samantha Fish, Kill Or Be Kind,

Samantha Fish has established her reputation as a solid blues rocker with five terrific solo albums. Her debut on Rounder Records, with her sixth album, is more rock than blues, eleven songs recorded in Memphis, with, as you might expect, something of a soul feel. 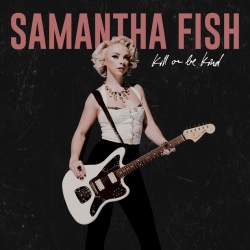 The original songs feature collaborations with Jim McCormick, Kate Pearlman, Patrick Sweeney, Parker Millsap and Eric McFadden. “When you get to this point in your life as an artist,” Fish says, “it’s good to work with others, because it makes you stretch. I think you hear a lot of that nuance on the record, songs that have a pop sensibility to them, hooks that really pull you in.”

And pulled in you are, with the strong melodies, the top notch guitar work and Fish’s versatile vocals which can belt out rockers like Bulletproof, Watch It Die or You Got It Bad, go all sultry on Dream Girl and Dirty and give-it-some-soul on the likes of Try Not to Fall in Love with You and She Don’t Live Around Here, in turns sweet, passionate, and gritty. It’s an impressive vocal performance, actually, on a set of songs that encompass soul, blues, pop and melodic love songs. There’s enough variety in the songs to keep you interested throughout, but with Fish and her band well in control of things, the set hangs together remarkably well.

Talking of the band, Austin Clements on bass, Doug Belote on drums, Rick Steff on Hammond B3 and synthesizer, and Andriu Yanovski on Moog synthesizer, are an excellent supporting cast to Fish’s impressive talents.

The album is choc full of good melodies and toe tapping rhythms. Says Fish, “I think I’ve grown as a performer and as a player. I’ve become more respectful of the melody. You can go up and down the fret board and up and down your vocal register, but that’s not going to be as powerful as conveying a simple melody that people can really connect to and sing themselves.”

There’s much here to like, for sure – especially after the first listen. I found myself getting more and more drawn in the more I listened, hearing better Ms. Fish’s skilful and measured guitar work throughout, the tasteful use of brass in songs like She Don’t Live Around Here, Watch It Die and Love Your Lies and the pop-territory vibe of Dream Girl and Fair Weather.

I especially liked the cigar box driven opener, Bulletproof, and the back to basics minor blues which closes things off, You Got it Bad.

Kill or Be Kind is a fresh, diverse set of songs, well executed by Samantha Fish and this excellent set of Memphis musicians and not one to miss.