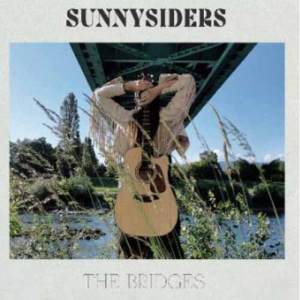 Blues from Croatia? Of course – the blues is an international language. Sunnysiders are Boris Hrepić Hrepa and Antonija Vrgoč Rola, who have been performing together for the last ten years and have recorded three previous albums. Their latest release, The Bridges, mixed at Ardent Studios in Memphis and featuring guests artists Manu Lanvin, Norman Beaker, Lorenzo Piconne, and Yogi Lonich, offers ten excellent tracks of blues and bluesy Americana.

Straight away Sunnysiders take us down to the Delta with Crossroads of Your Own, a rockin’ mix of guitar and harmonica driven blues. Up and running, we’re ushered into When You Come So Near by an urgently strummed acoustic guitar before the raspy vocals of Boris Hrepa kick in, Leonard Cohen-like. He and Antonija Rola alternate the vocals on this one, giving us a good opportunity to appreciate their voices. Antonija’s voice is versatile on the album, at times a powerhouse, at times nicely restrained, while Boris at times can be downright scary. The contrast when they sing together is intriguing and quite compelling.

There’s a really nice balance to the album, a nice variety to the set of songs, but all cohering well. You’ve got the near-jazz of Tiny Soul, the hard rockin’ Blockstop, the heart-rending You’re Not That Good for Me, the acoustic blues of No Pockets in the Grave and the Delta sounds of Heaven Blues Band.

It’s terrific stuff, the fine vocal performances augmented by great and interesting song arrangements and some very cool guitar work. The call and response between singer and guitarist on You’re Not That Good for Me is very cool, as is the loose-sounding acoustic work in No Pockets in the Grave, and some tasteful accompaniment in Tiny Soul.

With this album, Sunnysiders prove themselves to be fine songwriters, with fresh-sounding lyrics, and top-notch performers, and they deserve every bit of attention within and beyond their native Croatia.