Santa Claus is Coming to Town

Gottfried’s version is based on that of Bahamian guitarist and singer Joseph Spence. You can find Joseph’s Santa Claus is Coming to Town here. 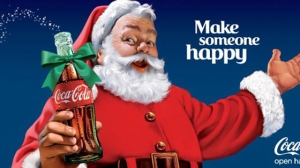 So, what is it with Santa? Who the heck is this big guy in the red suit? Santa Claus is generally depicted as an overweight, white-bearded man wearing a red coat with white fur collar and cuffs, red trousers, and black leather belt and boots – and of course the bag full of goodies for children. This seems to have originated in the 1823 poem “A Visit From St. Nicholas” and of caricaturist and political cartoonist Thomas Nast, and it quickly became popular in the United States and Canada in the 19th century. This sort of image of Santa Claus was further popularized through Coca-Cola’s Christmas advertising in the 1930s.

But behind the fat guy in red stands the historical figure of St. Nicholas. Born in AD 270, he became the Bishop of Myra in Lycia (modern day Turkey). He had a reputation for secret gift-giving, such as putting coins in the shoes of those who left them out for him, and thus became the model for Santa Claus.

Nicholas was the only son of wealthy Christian parents who died in an epidemic while he was still young and he was raised by his uncle, the bishop of Patara. He followed in his uncle’s footsteps, becoming a priest and then a bishop.

In 325, he was one of many bishops to appear at the emperor Constantine’s Council of Nicaea, where, as a staunch defender of the Orthodox Christian position, he signed the Nicene Creed. During the council, the presbyter Arius was called upon to defend his position on the inferiority of Christ. Nick, feeling Arius’s position was just so much nonsense, listened for a while but eventually could take it no more, so he stood up and laid in to Arius with his fist!

As a result of this outburst of temper and violence, our good St. Nick was stripped of his office as a bishop and held in a prison cell. Fortunately for him, Jesus appeared to him in his cell, appeared puzzled as to why he was being imprisoned, and presented him with a copy of the Gospels. As a result of this miraculous intervention, the emperor promptly restored Nicholas to his bishop-ship.

While this fist-fight story has become quite well known, what perhaps is not so well known are stories where Nicholas acted to protect children from being taken into slavery, save young women from being sold into prostitution, save his people from famine, and spare the lives of those innocently accused. While we can’t be sure of the veracity of all of these stories, the picture emerges of a man who acted on his faith with compassion, and seeking justice.

Which brings us to the true heart of Christmas – behind the stout guy in the red suit who represents all the worst excesses of Western consumerism, we have the One whom Nick sought to follow, whose birth brought about a new “kingdom, to be established and sustained with justice” (Isa 9.7), and who would “scatter those with arrogant thoughts and proud inclinations, pull the powerful down from their thrones, lift up the lowly and fill the hungry with good things while sending the rich away empty-handed. (Luke 1.51ff). The evil that Nicholas encountered in his day – slavery, sex-trafficking, injustice – still mar the world’s landscape. Christmas reminds us of God’s agenda for change in the world and of our need to get involved in God’s justice project.