The world waits for the hope-tellers among us

You might well be forgiven for asking what the blues have got to do with Christmas. For many of us, Christmas is about having a good time, partying, too much to eat and drink. We’re not sure what we’re celebrating, but hey, it’s the middle of winter and we could do with a few parties! For those of us who see Christmas as all about the coming of God to us in the form of a baby, it’s a time of great joy and celebration. The world turned decisively on that day in Bethlehem in the first century, and the possibility of a new way of being human and a hope for a better and just world was born. That’s not the blues – that’s joy, laughter, hope and love.

But the blues are a continual reminder of the sorrow, pain and injustice of the world. B. B. King said “The blues is an expression of anger against shame and humiliation”. One of his songs is That’s why I sing the blues which reminds us of the roots of the blues in the injustice suffered by African Americans from the seventeenth century onwards in America – from slave ships to life in the ghetto, to the unfairness of the criminal justice system to a myriad of “troubles”.

In his recent album, The Candy Store  Kid, Ian Siegal sings Lightni’ Malcom’s song: “So much trouble in the world today, so much trouble”. It reminds me, too, of Dylan’s 1993 song, World Gone Wrong.

The blues are a window into the experience of all manner of injustice and suffering in the world. As if we needed any reminder – we remember the unspeakable anguish which visited the community of Newtown, Connecticut, just a year ago. It’s hard to comprehend the depth of evil that has assailed these families and the extent of their suffering. In the year since, around 33,000 people in the United States have died as a result of gun violence. 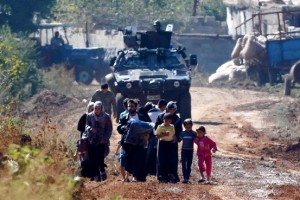 Further from our doorsteps, Syrian women, children and men are living rough, cold and hungry in camps on either side of the Turkish border and in the Lebanon as a result of the civil war engulfing that nation. Scores of small children in Pakistan have been killed over the past few years by US drone bombing – we note with horror the statement by Time’s Joe Klein, as he tried to defend this, “the bottom line in the end is whose four-year old gets killed.” As is always the case in armed conflicts, it’s the innocent who suffer the most. Around 60 armed conflicts between nations in the world this year, including many throughout the continent of Africa and in the Middle East, have left thousands dead and many, many more in the direst of straits.

The word of the angels to the shepherds in Bethlehem was “Do not fear”. The word of gun-toting violence is “Be very afraid” – be afraid for your life, your food, your home, your future. Walter Bruggemann says, “The world waits for hope-filled truth…while we wait in the abyss, newness does not seem possible. But hope breaks fate. Hope for newness cracks open what seemed to be true in perpetuity. The world waits for the hope-tellers among us.”

That hope is possible because of the Christmas story – into the lives of the poor, ragged shepherds, huddled on a Palestinian hillside, broke a dazzling heavenly choir, singing about a new day of peace coming to the earth, somehow all bound up within the swaddling cloths of a new born baby in the local town. Into the bleakness breaks hope, and because of that hope, joy breaks forth. Things are changing, we find out, as we read the Christmas story – the arrogant are going to be routed, despots thrown down, the hungry filled with good things and the rich sent away empty handed. In the birth of this baby lie the seeds for changing the world, for bringing peace and setting things right.

If we let it, we can ourselves be caught up in this story – becoming hope-tellers and hope-bringers as we pursue the way of peace. That way is costly, however. The announcement to the shepherds was “peace on earth” and the coming of Jesus was meant to “guide our way into the way of peace” (Luke 1.79). This theme of peace is at the heart of the New Testament, actually – God is the “God of peace.”

It’s a big ask, though, particularly for people like us who comfortably inhabit the story of “a global market economy supported by an undisciplined militarism in the service of a limitless consumer entitlement” (Brueggemann). But the peace and the hope the world craves for will only come through those who, in the name of the Prince of Peace, are prepared to break with the gospel of greed and practice love, generosity, hospitality and forgiveness. And who will be those who seek to broker peace, to pursue peace, to bring peace.

Eric Bibb – We’ve Got to Do Better