Down at the Crossroads’ blues artist interviews: 6 things we learned

Down at the Crossroads’ artist interviews: 6 things we learned

We interviewed 11 artists this past year. Here are some of the things they told us: 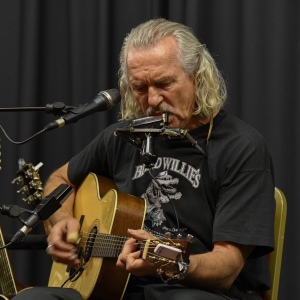 1. The blues legacy: A common theme in the artists we interviewed was the debt they owed to the blues legacy they have inherited. Veteran New Orleans bluesman Bryan Lee told us about how hearing Freddie King as a young man first hooked him on the blues. He went on to say that “the blues is a universal language…it goes to our make up in our soul.” Acoustic blues maestros Brooks Williams and Hans Theessink talked enthusiastically about playing the blues together, “combining some country blues, a little bit of Texas blues, some of the Delta, some really nice Broonzy-style finger picking.” Eric Bibb talked to us about “connecting the history and the situation in the American South and the blues tradition with what’s going on in the rest of the world,” and when we interviewed Mandy Brooks she spoke about the healing and connection that comes in the music of people like Blind Willie Johnson and Fred McDowell, and about the truth that we are able to connect with in these artists. Brooks Williams noted the way that the early blues artists were trying “to make some sort of living, to make a way in the world playing music, and that is powerful, considering what some of those players would have been up against, socially, economically. Those were some pretty huge mountains to cross, and just the fact that they did it and we’re still listening to it. And it’s still vibrant!”

2. We love what we do: All 11 of the artists we talked to this last year are hard-working musicians, touring constantly, giving their best, no matter what the size of audience is, night after night. Can’t be easy, especially as you get older, yet Eric Bibb said that “the joy of performing never goes away.” Blues guitar virtuoso, Ana Popovic, talked about playing with her great band and the wonderful fans that support her, while Chris Smither said that “as soon as I get on stage I realize, this is what I do, this is what makes me happy.”

3. The touring life: Eric Bibb told us he doesn’t “want to stop touring. It’s an essential part of what I’ve enjoyed and still enjoy doing” The physical side of it, however, “especially the hauling of your instruments around from place to place and so on – that can be a strain.” Chris Smither who still plays over 100 shows a year says he’s slowed down some, but admits in some ways it’s become easier – “I can afford nicer accommodation!” Luke Winslow-King, way younger than both these artists, confessed he’d “like to settle down and lead a more normal life, have a more stable relationship, have a home life as well. But I’ll never stop touring and taking this music around.” It’s the love of the music, the love of performance which keeps these fantastic people going – for which we are all grateful.

4. The state of the world: There’s a lot to be discouraged about looking around the world – not least in the United States. Some of the artists were quite outspoken: Eric Bibb spoke about racism – the “tremendous prejudice against what is referred to in the news as people of colour…[an] orientation [that] is so ingrained, so institutional, that people don’t think about it.” Shemekia Copeland talked about the song she has recorded called Would You Take My Blood which directly addresses the problem of racism. “All I want is some respect,” sings Shemekia. How can the problem be addressed, we asked her: “An incredibly difficult question,” she replied. “A good start might be if people actually lived according to beliefs espoused by their religion. The golden rule would be a good place to start.”

Janiva Magness spoke about the need for more gun control – she said, “thoughts and prayers and all that – it’s the time for action and not simply platitudes,” while Chris Smither spoke about a song in his new album which references the “clown with a comb over, tweeting on his phone.” Eric Bibb drew attention to the fake news consumed by many people, saying, “with a diet of that and little else, it’s very possible to get a very distorted view of the world – where a guy like Donald Trump could be appealing.”

5. Women in the blues: The history of the blues is peppered with misogynistic lyrics and the abuse of women. Thankfully things are changing and two of our women interviewees made important points. Janiva Magness said that “there are certain disadvantages because I have different plumbing than you – that’s real. That’s not based on skill, or ability, it’s certainly not based on talent, so those prejudices are based on some very old distorted thinking and philosophy. And I have to raise my hand on the #metoo movement…I have absolutely dealt with sexual harassment my entire life. I’m a woman in the world. Anyone who is surprised by that is either not paying attention or is on some level some kind of perpetrator.” Ana Popovic told us the theme of her new album, Like It on Top is “female empowerment,” which leaves us in no doubt that women should have equal pay and equal benefits. “There’s nothing crazy about it. It’s just the new world.”

6. Faith, hope and spirituality: Dana Fuchs spoke about her song, Faithful Sinner, and said, “Ultimately, aren’t we all just flawed beings who are trying (I hope) to do the right thing?” Paul Thorn, who grew up the son of a Pentecostal minister, hit the same note: “Whoever you look up to the most in life, your hero, whoever that may be, you have to understand, that person is very flawed. We’re all flawed. Nobody is all good and nobody is all bad. That’s the thing I think this record also says – we’re all in it together.”

Despite the difficulties we face inside ourselves or without, our artists expressed hope for the future. Eric Bibb said, “I see no choice but to hold out in my music and my songs a message of hope because otherwise, everything becomes pointless.” And when we asked Shemekia if, as she looks around at America today, she has cause to be hopeful, she replied, “Totally, it’s still the greatest country on earth. I love it and it will always be my home.”

Talking about the need for faith, Bryan Lee said that “we just need to go to that place of sanctuary, where it’s real still, it’s real quiet, where you can really touch the good Lord and find answers to your problems,” while Mandy Brooks insisted that “God gives us the strength to “press on” and “move on up”.”

Bringing it all down to the personal and practical, Janiva Magness said that love is an action – “it begins with us, it begins at home. Helping someone who is in need. It begins there. Do it. Do something every day to help someone else.”

Check out the interviews: