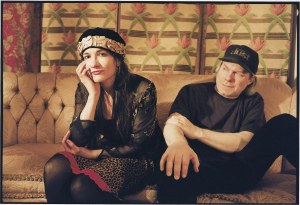 Shelter Me Lord is a Buddy & Julie Miller song from the 2004 album, Universal House of Prayer. It’s been covered several times since then – by Tab Benoit, Patti Scialfa with Blackie and the Rodeo Kings and recently by Paul Thorn – all featuring that unmistakable guitar riff that grabs you and won’t let go throughout the song. Bizarrely, the song was used as the theme to a reality TV show called Sons of Guns which focused on a Louisiana-based business that manufactures and sells custom weapons – an example of the unholy alliance of guns and religion in the US?

The song is an unabashed hymn of trust in God. The last line of each verse cries out “Shelter me Lord underneath your wings” and the chorus reinforces this, repeating the need to be hidden securely by God from the troubles and dangers of the world. The feel of the song is bluesy and it echoes the blues lament about the state of the world and the misfortune facing the singer. The storms of life are blowing, they are all around – in fact, things are such that everything that seems secure around is failing: “the walls are crumbling”, the very earth is shaking and the mountains falling, and there is a “deluge” pouring out and over the songwriter.

The apocalyptic language of the song describes well how bad things can get for us at times – trouble has a way of just creeping up on us and overtaking us at times. Sometimes it’s of our own making – we’ve been faithless, we’ve acted stupidly, we’ve allowed self-indulgence to slip into addiction. But sometimes, it just happens – we or someone we love gets sick, a loved one dies, we lose a job and plummet into financial turmoil.

The blues has always been a great medium for expressing the sorrows and woes we face – arising as they did in the face of African American suffering & oppression in the days of the Jim Crow laws. Such expression is cathartic and it’s real. As Furrie Lewis said – “all the blues, you can say, is true.”

Buddy Miller’s song doesn’t just rail at the misfortune and the bad times, however – it seeks a port in the storm, a place of refuge. Here it’s not just a matter of catharsis – there is somewhere to go, there is someone to turn to. The song is surely based on some of the Psalms where this idea of the person in trouble, in desperate need, going to God comes through most strongly.

For he will hide me in his shelter in the day of trouble; he will conceal me under the cover of his tent; he will set me high on a rock. Psalm 27:5

Let me abide in your tent forever, find refuge under the shelter of your wings. Psalm 61:4

But the Psalm that seems to connect most with the song, I think, is Psalm 91:

Whoever dwells in the shelter of the Most High will rest in the shadow of the Almighty. 2 I will say of the LORD, “He is my refuge and my fortress, my God, in whom I trust.” 3 Surely he will save you from the fowler’s snare and from the deadly pestilence. 4 He will cover you with his feathers, and under his wings you will find refuge; his faithfulness will be your shield and rampart. Psalm 91:1-4

These Psalms have always been an expression of faith and a source of comfort to people facing oppression, injustice, hard times or just the ill winds of life that blow our way. It’s faith that flies in the face of the circumstances, a defiant faith, that’s based in an understanding of God’s character and love. It reminds me of that Tom Petty song – Won’t Back Down. I love the gutsy determination of this song – “you can stand me up at the gates of Hell, But I won’t back down”. The world might be “dragging me down” or “pushin’ me around” but “I’ll stand my ground, And I won’t back down.” I love the sheer defiance expressed here – and if our faith is in God, then there’s a rational for this defiance, which is grounded in God’s providence and deep love for us.

Buddy Miller’s song moves on to an even deeper level of defiant faith – faith in the face of death:

Now on the day you call for me
Someday when time – no more shall be
I’ll say Oh death where is your sting
You shelter me lord underneath your wings.

once again, echoing an Old Testament passage, this time, Isaiah 25:

He will swallow up death for all time, And the Lord God will wipe tears away from all faces, And He will remove the reproach of His people from all the earth; For the LORD has spoken. 9 And it will be said in that day, “Behold, this is our God for whom we have waited that He might save us. This is the LORD for whom we have waited; Let us rejoice and be glad in His salvation.

Which, of course, was famously taken by St Paul to round off his great chapter on resurrection in chapter 15 of his letter to the Corinthians. As Paul says, “the last enemy to be abolished is death.” At this point each of us needs somewhere to hide, a place of safety – it’s at this point we come face-to-face with the reality of our defiant faith.