“Luke Winslow-King showcases the best of early blues for a new time.” 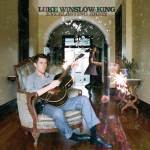 Luke Winslow-King, ably assisted by the talented Esther Rose, has given us a stunning album of rootsy, bluesy Americana in Everlasting Arms. It’s old-time, yet always manages to be fresh, and it’ll bring a smile to your face every time you listen to it. For sure, it’ll be a contender for Down at the Crossroads’ album of the year. With 13 songs that weave seamlessly through the blues, country and folk with hints of jazz, the whole album is a delight from start to finish.

The title track hooks you right away. It’s an upbeat, sing-a-long gospel number, with alternate verses winsomely sung by Winslow-King and Rose. The song is infused with a blues feel, has gorgeous harmonies in the chorus and features Winslow-King’s joyous and tasteful slide guitar.

The song is a simple re-write of an old gospel hymn, Leaning on the Everlasting Arms, which was featured recently in the Coen brothers’ hit Western True Grit. The original was composed in 1887 by Anthony Showalter in Hartselle, Alabama. He had been sent there as a trained musician as part of a educational programme to teach people in rural America how to sing.

Showalter wrote to both men immediately to sympathize with their grief and wanted to find a suitable Bible verse to include that might bring some comfort in these most desperate of circumstances. He chose Deuteronomy 33:27: “The eternal God is your refuge and underneath are the everlasting arms.”  As he pondered and wrote, he began to write the chorus of what would become the well-loved hymn:

Showalter explained to his friend, Elisha Hoffman, who was a prolific author of hymns, that he had a chorus, but no verses. Mr. Hoffman duly supplied the verses and Sam Duncan, a student and nephew of Mr. Showalter, wrote the tune and the rest is history.

Fast forward to 2010 and the Coen brothers’ film adaptation of Charles Portis’s novel, True Grit, previously filmed in 1969 starring John Wayne. The movie was hugely successful and was nominated for ten Academy Awards. Permeating the film soundtrack is Showalter’s hymn Leaning on the Everlasting Arms. Ethan Coen noted that they were making a movie about a Protestant girl and that “the music crystallizes the whole thing.”

Although we hear snatches of the melody throughout the movie, the song is not actually sung in its entirety until the end, when Iris Dement’s haunting and distinctive voice, which seems to hark back to an earlier and simpler age, accompanied by piano and strings, forces you to watch all the way through the credits. Leaning on the Everlasting Arms is from Dement’s outstanding 2004 album, Lifeline.

What a fellowship, what a joy divine,

Luke Winslow-King simplifies the song down to two ingredients – the everlasting arms and the burdens we “carry too long” – but adds a third: “You can lean on me.” Here he captures beautifully the way in which the comfort of God’s everlasting arms is felt – through each of us.