“It’s sort of like I tell people I used to play the blues and go to clubs and I used to dance on the floor. I say, I haven’t quit dancing, I just changed partners.” Rev. John Wilkins 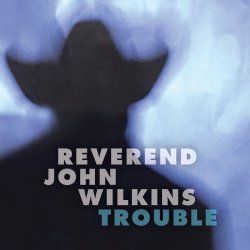 John Wilkins’ second solo album of gospel blues is, quite simply, terrific. Eleven inspirational songs, including some classics like Wade in the Water and Grandma’s Hands are pulled off with considerable aplomb by Wilkins, his three daughters on backing vocals, and a fine quartet comprising Kevin Cubbins on guitar, Jimmy Kinnard on bass, Steve Potts on drums and Rev. Charles Hodges on organ.

The very sad thing is, though, that John Wilkins passed away on October 6, four days before his 77th birthday, before having the chance to tour or promote the music on the album. He had contracted coronavirus earlier in the year and died of complications from COVID-19. Though in his seventies, Rev. Wilkins was a strong man, full of life and, as his tour manager said to me, with many more years of touring and making music ahead of him.

The album, then, remains a great tribute to his talent and faith. John Wilkins was the son of Rev. Robert Wilkins, blues-singer turned preacher, of Prodigal Son fame, which had been picked up by the Rolling Stones and recorded for their 1968 Beggar’s Banquet album. Robert Wilkins had played blues in the 1920s and 30s, but abandoned his secular career toward the end of the 30s because of an incident in a juke joint, and gave himself to a life in church ministry, in the process converting many of his blues songs to gospel. Prodigal Son, for example, had previously been That’s No Way To Get Along.

Like his father, John Wilkins as a young man played blues in North Mississippi juke joints on Friday and Saturday nights, and then played on a number of recordings in the 1960s and 70s. The church, however, called and in the early 1980′s, Wilkins, like his father before him, moved into church ministry, becoming pastor of Hunter’s Chapel Church in Como, Mississippi. This was a church that ministered to many North Mississippi musicians and had previously had been attended by Fred McDowell and his wife.

Wilkins also worked in the Memphis Parks Department, and then on retiring in 2006, resumed his music career, releasing his debut solo album You Can’t Hurry God on Fat Possum Records in 2010.

Trouble gets off to a cracking start with the title track, driven by an insistent guitar riff, with John Wilkins’ powerful and raw vocals bemoaning all the trouble and confusion in the world, which leaves him – “standing at the crossroad, wondering which way to go.”

The rest of the album answers the problem of the first track. In You Can’t Hurry God, Wilkins assures us, in this slow number with its insistent arpeggio guitar background, that “he’ll be there, you don’t have to worry.” God may not come exactly when you want him too, but he’ll come, he’s always, “right on time.” Wisdom borne of a lifetime of faith. This is spine-tingling stuff, especially when Wilkins’ daughters’ harmonies kick in. Someone has referred to them as the Staples Singers of the North Mississippi Hill Country – Tangela Longstreet, Joyce Jones, and Tawana Cunningham.

They really are very, very good, and you get to appreciate them throughout the album. They serve, not just as backing vocalists – they get to both share the lead vocals with Rev. John on God is Able, another riposte to the first track; on Darkest Hour, which takes us right into the church house, with the organ sweetly playing behind the women’s reassuring harmonies; and on Found Love, where we find ourselves in proper traditional soul territory.

The whole album is a powerful expression of faith and hope. Musically, it’s urgent, it’s rousing, it’ll have you either dancing or on your knees, if you’re a believer, and if you’re not, you’ll start wondering where you can find a Down Home Church. The vocal interplay between John Wilkins and his daughters is outstanding, as is Hodges and his band. Wilkins’ own vocal performance is riveting.

The final song, Storm and Rain, starts with John Wilkins’ testimony – “I come through the storm and rain, but I made it” – before morphing into a rockin’ Get Right Church and I’m Going Home on the Morning Train. It’s a fitting way to finish what turned out to be Rev John Wilkins’ final recording. He’s gone home on the morning train.