After 27 albums and a career spanning five decades, what has the 69-year old Walter Trout left to say? Plenty, it seems, going by this terrific album, one of his best. Eleven songs, recorded at Doors’ guitarist Robbie Krieger’s studio in California, Ordinary Madness sees Trout in stellar form, wielding his Stratocaster as only he can and imposing his big personality on every track.

There’s no sign here of Trout resting on his laurels. He’s had an incredibly successful career, but he’s pushing ahead here, both lyrically and musically. Ordinary Madness sees him at his most honest, as he deals with the world’s woes, the aging process and the theme of love. “Everybody is dealing with something,” he says. “And I’m no different from anybody else. Ordinary madness doesn’t mean you’re gonna end up in a mental institution. It’s just being human. It’s common humanity.”

The album kicks off with the title track, whose sombre lyrics seem to echo what we’ve all been going through these past few months with the pandemic, even though the song predates it – “the sadness and the fear and the madness which stays there in your gut.” Against the interplay of keyboards and guitar, Trout’s lyrics seem to be both universal and intensely personal – “this everyday kind of madness – it’s here inside of me.” Walter Trout said about the album that it was an opportunity for him to come to grip with his inner demons, which, actually, has been a lifelong process.

In My Foolish Pride, which gives us a nice piece Americana rather than blues, there is more confessional, Trout lamenting how he “gets all wrapped up in myself,” how he stumbles and falls, and how his “foolish pride…gets a hold of me and holds me down.” It’s a beautiful song, actually, and the inevitable guitar solos soar and sing and provide some uplift for the confessing sinner.

The guitar work is all you’d expect in a Walter Trout album. He’s one of those few guitarists where you know who’s playing within a few bars of hearing him, such is the quality and distinctive tone he gets. Throughout the album there’s smouldering heat, there’s fast and furious, there’s gut-wrenching emotion, there’s sweet, melodic tones – but always there’s feeling. There’s never just a guitar solo – there’s Walter Trout, the man, looming behind every phrase, every note. In my book, there are only a few guitarists capable of this standard of playing.

Heartland tells a short story about having a dream, but needing to leave where you are in order to get there. All Out of Tears is a stand-out track, a minor-key blues, co-written with Teeny Tucker mourning the death of her son, which brings a torrent of emotion from Trout’s singing as well as his guitar work. 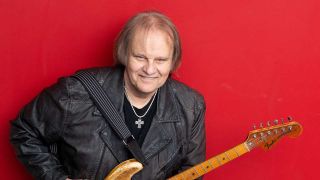 Final Curtain Call serves up one of the main themes of the album – the aging process, with some heavy beats reinforcing the message: “I know I’m getting older…sometime it seems to me that time is moving way too fast.” But I love Walter Trout’s defiance here – although he knows sometime he’s going to “hit the wall,” he’s going to “give it everything I’ve got, until the final curtain call.” Great attitude, but of course, Walter Trout knows what it’s like to look death in the eye and then be able to walk away – after his 2014 last-minute liver transplant, he’s clearly decided to wring every last drop of vitality from life.

Trout’s wife, Marie, wrote the lyrics to Heaven in Your Eyes, a song of lost love and Trout does the song full justice with an intelligent guitar solo.

The Sun is Going Down is introduced by a heavy guitar lick and some ominous harmonica, before the theme of the song becomes clear:

“Time has no mercy, it just don’t seem to care
It’s brutally honest, and it’s oh so unfair.”

We hear you Walter. Some of us aren’t that far behind you and the feeling of more time behind you than in front is no laughing matter. The guitar solo here seems to rail against the passage of time and morphs into a frenetic scorch up and down the fret-board, echoing the unrelenting march of the years.

The album closes out with a more characteristic rousing Walter Trout blues-rock number, OK Boomer, the introspection and age-angst gone. “I like my music loud, You got to hear me when I say, I’m a boomer and I’m OK”

This is one very fine album of hugely enjoyable songs, all nicely varied, with intelligent lyrics, great singing, and of course, that hypnotic and thrilling guitar of Trout’s, in turn simmering, shimmering, smouldering and blasting. Walter Trout never gives less than one hundred per cent, but with Ordinary Madness, he’s raised his own high bar even further.