Conforth & Wardlow: Up Jumped the Devil: The Real Life of Robert Johnson

Robert Johnson was hailed as the “king of the Delta blues.” His short life ended in 1938 at the age of 27, but his songs have become standards of the blues canon, valued and covered extensively by a veritable who’s who of the world of rock and blues, including Bob Dylan, Eric Clapton and Keith Richards. He is recognized as an outstanding guitarist and a songwriter who pushed the boundaries of the genre during his lifetime. After decades of the promulgation of half truths and myths about his life, including, famously, the deal with the devil at the crossroads story, or that he recorded all his songs facing the wall, long-time blues scholars Bruce Conforth and Gayle Dean Wardlow have written the definitive biography of Johnson, dispelling the myths and revealing the real Robert Johnson, in all his brilliant but flawed humanness.

Conforth and Wardlow have the pedigree for such a task – Conforth was a professor of blues, popular culture and the history of social movements at the University of Michigan and the founding curator of the Rock and Roll Hall of Fame; while Wardlow is a highly regarded blues historian whose book Chasin’ That Devil Music is a classic of blues literature. They have meticulously researched just about every source possible, including every personal recollection about the musician committed to tape, page, or film, old censuses and much else besides. The result both contradicts many previous attempts at describing or interpreting Johnson’s life, and presents a coherent account of Johnson’s origins, development as a musician, his tragic private life, his rambling and the circumstances of his death. Plus we get an outstanding account of Johnson’s two Texas recording sessions.

This is a world away from blues writer Pete Welding in 1970: “No other blues are so apocalyptic in their life view. They are shot through with dark foreboding, and almost total disenchantment with the human condition [and] besetting, mindless terrors that haunted all his days and nights. . .His songs are the diary of a wanderer through the tangle of the black underworld, the chronicle of a sensitive black Orpheus in his journey along the labyrinthine path of the human psyche.” 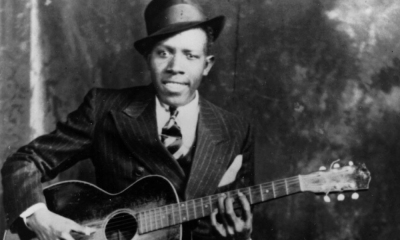 The book is well written and highly engaging, and takes us from Johnson’s birth in Hazlehurst, Mississippi through his very difficult childhood, his rejection of the sharecropper life, his development as a musician, on through to his wild days of rambling, drinking and womanizing and his sad demise. It’s a harrowing tale in many ways, with Johnson’s personal tragedies around the death of his first wife and child and the separation from another woman he loved and their child, laying the foundation for his abandonment to drink and one-night stands as he moved restlessly from town to town playing juke joints and parties.

But it’s a story of musical genius, hard work and determination too. Conforth and Wardlow lay to rest once and for all the crossroads myth. The story goes that Son House first saw Johnson as a pretty useless guitar player and, along with everyone else, was startled by his expertise when he arrived back in Robinsonville after having disappeared for a period of time. How could anyone have gotten so good so fast – unless the old African folk tale about the crossroads magic was true? (not that Son House himself ever suggested this). The more prosaic truth, the evidence points to, is that Johnson, after traveling down to Hazlehurst to search for his biological father, fell in with Ike Zimmerman, a very accomplished guitarist, who generously taught and mentored the young man, who proved to be a ready student and worked hard to hone his guitar chops.

The devil at the crossroads myth, the authors explain, however, was somewhat encouraged by Johnson’s own negative attitude to religion and his penchant for hoodoo, a kind of folk superstition drawn from traditional practices from Africa, Brazil, the Caribbean, and other locations that sent slaves to North America. Hoodoo found its way into a number of Johnson’s songs, including Stones in My Passageway and Dust My Broom. When drunk, Johnson was well known to blaspheme vehemently, blaming God for his various misfortunes.

So what Conforth and Wardlow have given us, through their painstaking research, is a picture of a complex character, a very human character, forged and moulded by both the social situation in Mississippi at the time and his own personal circumstances. It all makes for a very coherent picture. But to be clear – the book has a clear focus on the music that Johnson made and leaves us in no doubt as to the man’s talent, hard work and legacy.

The book concludes with a final chapter on Johnson’s legacy, which, the authors, explain stem from John Hammond’s historic 1938 Carnegie Hall “From Spirituals to Swing” concert. Up Jumped the Devil gives us Robert Johnson the man, as opposed to the myth that developed. As such it is required reading for any blues fan, and indeed, for any serious music fan.