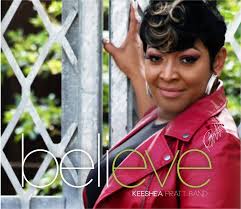 One very fine album of soul-soaked blues, featuring an outstanding 7-piece band and the wondrous Ms. Keeshea Pratt, whose soaring and thrilling vocals sparkle on each of the twelve tracks. The songs, all originals, written by bass player and musical director Shawn Allen alone or with a collaborator, are a fine collection of blues, gospel and soul.

Although the music channels both Chicago blues and Memphis soul, it sounds bang up to date; this talented collective manages to put its own distinctive stamp on the music while still keeping true to southern blues roots.

There’s a nice variety in the songs presented, but the feel and sound of the record is consistent throughout, and the musicianship and recording quality is never less than excellent. A three-piece horn section of trumpets and saxophone (Misaki Nishidate, Dan Carpenter and James Williams III), fill out the sound and add a lovely retro feel here and there, without ever dominating; there’s some tasty harmonica playing on Home to Mississippi, some nifty guitar licks from Brian Sowell, and the rhythm section of Shawn Allen and Nick Fishman keep the whole thing as tight as a drum head.

There is a lot to admire on the album: the invitations to party of In the Mood and Shake Off Your Blues; the sultry It’s Too Late, with its delightful piano and horns interplay; the positive, assertion of the title track, Believe; the live, slow and sultry, So Bad Blues, which puts the spotlight on Ms. Pratt’s earthy and sensual vocals and features a heart rending guitar solo.

But I guess my favourite is Home to Mississippi, a toe-tapping, out-and-out blues number which kicks off with some Robert Johnson-esque licks, name-checks Clarksdale, Jackson and Tupelo, Mockingbirds, catfish, and the muddy waters before giving us a slinky guitar solo and the final verse of Keeshea’s slow-burning vocals take us home.

This band, which won the Band section of the 34th Annual International Blues Challenge in Memphis, with polished, soul-stirring performances, is top-notch and this album shows them at the top of their game.