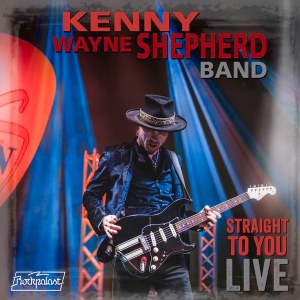 We’ve all been starved of live music this year, so this release from The Kenny Wayne Shepherd Band is especially welcome. This is one to boot up on your big TV screen, wind up the volume on the sound bar and sub-woofer, turn off the lights and lose yourself for an hour and a half’s feast of rock and blues. You’ll not be disappointed.

“People have been asking us to do a live concert video forever, for decades,” said Shepherd. “We’ve been working so much focussing on studio recordings. But I’ve been hearing the call from the fans for many years now,” and, given the pandemic’s effect on live music, it’s great to get a taste once again of the live experience of a band in blistering form.

This show took place at the famous Leverkusen Jazzstage for the iconic German TV show, Rockpalast on 25th November 2019. Both the video and audio quality are superb and it’s the next best thing to actually being there. In fact, with the multiple camera angles, close-ups of the musicians at work, and especially for guitar fans, the close-ups of Shepherd’s fret work, in one sense it’s better. But of course nothing really beats the excitement of a live show.

Shepherd’s seven-piece band is a finely honed unit and delivers a performance full of energy and verve that clearly delighted the German crowd and, I have to say, drew me in from the opening power chord as I began to watch.

Kenny Wayne Shepherd is a cool-looking dude, it has to be said. Slim, dressed all in black, bound-up hair protruding from behind and under a black hat with a fancy band around it, he owns the stage. It’s all you want from a guitarist, visually, really. Legs astride, soloing effortlessly with the required mushy face, occasional bit of head banging, as he gets lost in the music. Very cool, Kenny.

But of course, it’s the music we’ve come for. The Louisiana singer, songwriter and guitarist has been plying his trade for over twenty years, and, yes, the man is a jaw-droppingly good guitarist. He can sing a bit too.

In that department, he’s aided by long-time band member Noah Hunt, who takes the lead on several songs, including the opener, Woman Like You, which sees the band come out swinging, setting the mood for the rest of the show. Hunt also has a commanding stage presence, back-length hair flowing, and his honeyed but powerful tones add some nice variety, as well as considerable vocal oomph, throughout the concert. His performance on Shame, Shame, Shame is stand-out, and his and Shepherd’s voices meld nicely together as well on Long Time Coming.

And what a band this is – the saxophone and trumpet work brilliantly. I’m not a great fan of overpowering brass in a blues band, but these guys, Joe Sublett on sax, and Mark Pender on trumpet, add to the special sound of the band and give solo performances you really want to hear. When Pender takes his solo on I Want You, the power, the variety, the jazzy feel, just make you want him not to stop. Same with Sublett on Talk to Me Baby. Talk to Me Baby is the point in the concert when the band launch in to out-and-out blues mode. You’ll not hear another blues-rock performance that’ll delight you as much as this – seriously. The solos slip effortless around the band, each one completely mesmerizing.

Drummer Chris Layton, a 2014 inductee into the Musicians Hall of Fame as a member of Stevie Ray Vaughan and Double Trouble, Scott Nelson on bass, and keyboardist Joe Krown form the backbone of the band. All classy musicians. Check out Krown’s keyboard playing on Shame, Shame, Shame – the sort of bluesy piano that just gets right inside you.

But of course, centre stage is Kenny Wayne Shepherd himself, playing his Fender Strats with incredible versatility, taste and power. Voodoo Child is a fitting end to the show, Shepherd cranking things up with the wow-wow pedal, then striding across the stage with furious runs on the fretboard, Hunt wielding the mic stand in time-honoured rock style, the whole band giving it 100 percent and then some in ten minutes worth of soaring rock music,

“My name is Kenny Wayne Shepherd, I hope you enjoyed the show,” says a sweat soaked Shepherd. They did; I did; you will too.