Sir Rod and the Blues Doctors: Come Together 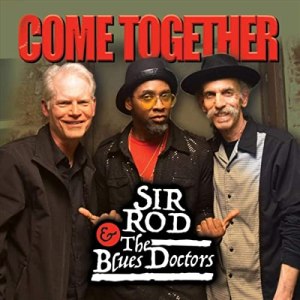 Patterson – Sir Rod – happens to be the nephew of Sterling Magee, former playing partner of Adam Gussow in the duo Satan and Adam, whose heart-warming story is told in the documentary available on Netflix. The pair played together on the streets of New York City, and featured in the U2 Rattle and Hum documentary before going on tour and recording three albums. The Blues Doctors are Gussow and Gross, who’ve played together for some years and have released two previous albums.

Come Together gives us four songs from the Magee-Gussow partnership, five covers from James Brown, Ray Charles, Rosco Gordon, Little Willie John and Howling Wolf, and a couple of originals.

One of these is the opening and title track, which gets the album off to a bright, rockin’ start. It’s a heartfelt appeal for leaving behind division and strife – “we’re so much stronger together, we really need each other.” It’s a great song, whose message is sorely needed at the moment in America, and Adam Gussow told me a little of the background to it.

“Back in 2017, I came up with this four-chord pattern, and it felt like a stomp down, blues rock anthem, it had a kind of power. Alan and I played it once, but I couldn’t think of any lyrics. It was just a jam, and I put it on YouTube. And the day before our second recording session, early to mid-February of this year, I was looking for material…and I went back and looked at the video, and the number of likes it had, and I thought, there is something to that. 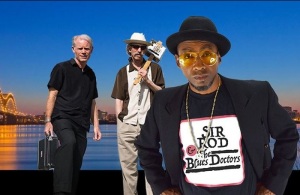 “So I sent Rod a link, I emailed him the night before he was going to drive five and a half hours to Oxford from Atlanta for the session. I said, take a listen to this, it never did have lyrics – if it grabs you, maybe you could come up with something. Now this was before Covid, before the racial justice [protests], and he says that he listened to it, not thinking he was going to like it. But he did…and he wrote the lyrics in an hour and a half. So he brought it into the studio and we did it…we then added a little background vocals and then a bass line with Jerry Jemmott, who is a world-class funk bass player, which helped pull it all together.”

The other song which is very timely is Freedom For My People, the Magee-Gussow piece which featured on Rattle And Hum. It’s got a bluesy, gospel feel with Sir Rod’s earnest vocals appealing for “freedom, now because it’s needed…it’s taken way too long.” The arrangement and harmonica riffs aren’t much different from the original, and it’s worth listening to this to hear Magee’s rasping vocals. And, of course, the song’s sentiment is every bit as forceful now – perhaps more so – than it was in the 1980s.

The album has some classic blues songs dealing with failed romance, including Rod Patterson’s So Mean, a slow number introduced by piano and plaintive harmonica. It’s a fine showcase for Patterson’s vocals, which take centre stage. I love the way throughout the album you keep getting these spoken interjections by Patterson – it’s almost the call and response thing you find in blues performed by African Americans, and which Adam Gussow, with his “professor of the blues” hat on, draws attention to and discusses in his recently published (and important) book, Whose Blues?

In many ways the album mirrors elements that come out in the book – the rooting of the blues in the struggles of African Americans, the protest against that, the reality of “blues feeling,” the vagaries of romantic love, the use of music to assert humanity and dignity, and the use of humour are all issues that Gussow discusses along the way and you can spot all of them in this album.

Not that I’d want you to do anything other than kick back and enjoy the good music and fun it is evident these three had in making Come Together. It’s a fine, varied feast of good blues which you’d do well to treat yourself to.

Check out this great interview with Adam Gussow about the Netflix documentary and his new book here.